The things some people do! Figured that's where I might find this one and I was right. There it was, the bottom covered in dirt, rusting away. How long do you think this 12 year old water heater has left before it's don't work so well anymore.

Dig er out and start over!

We won't say anything here about the missing inspection sticker from the state plumbing inspector!

Funny thing is, the seller told the agent there shouldn't be any problems with the water heater as they just had it put in  a couple of months ago!

A 12 year old water heater just put in a couple of months ago.

Somebody is doing some wool pulling.

Maybe later I'll hear the tale of who!

Erby, having spent many years of my life in Kentucky I can attest to just how creative those folks can  be! Thanks for the fun read.

I have never seen that before... creative but not very smart

Vickie:  See some of the blogs from the California Inspectors blogs.  Same stupid stuff there! (and everywhere).  I went to your blog to leave a comment but all that was there were market reports.

Scott:  It is amazing the effort people go to so they can do it wrong!

Now that is a new one... Some people just aren't very smart.. You'd think they would at least have a LITTLE common sense!!!

Just stopping by to invite you to the 2nd Annual ActiveRain Super Bowl Party. Hope you’ll come and bring some friends!

Ebry, you said it right...sometimes people work so hard at doing something wrong...truly amazing.  Really...what were they thinking anyway!!!  And how did they get it down there??

Maybe they bought the water heater used????  I'm amazed at some of the things home inspectors find!!

I've seen many dumb and dangerous installations in houses. This one ranks way up there.

Erby that is wild-what were they thinking? yes only put in a few months ago

Wow, yes people can really try to pull one over on realtors.  But when it comes down to it, the inspection tells all.  Great post!

You must have been out in the boondocks, which is where I sometimes find water heaters exactly like that. You’re not invading my territory, are you? J

Sounds like someone taking a short cut and using a used heater.  The dirt must have been top hide the leaking?!

Is this even legal?

I have seen something similar... SCARY.

May 29, 2011 09:48 AM
LIKE
#15
Show All Comments
Older Post Newer Post
Back to Top
Generate More Leads from this Listing
With a Trulia Pro Account
Learn More
Find what you need?
See More Blog PostsAbout Real Estate! SEE MORE NOW!
Rainmaker
207,870 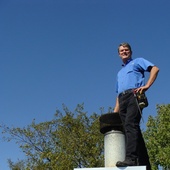