Warning: This is a bit of a rant.

My son lost his iPod Touch on the bus yesterday.  Today, the bus driver returned it to him.  I was not surprised - I was happy, but not surprised.  Others were surprised.

I absolutely refuse to expect the worst in people.

"Ha! Poor girl. Is she ever gonna get used!!"  Anyone thinking that?

And sure, I have been used from time to time.  But I'd much rather get bamboozled, stepped on, disillusioned, or used once in a blue moon than to go through my life with every encounter tinged with cynicism just so that I can avoid that rare time when someone may pull a fast one on me.

This is not to say that I don't try to "read" people and ensure I act accordingly.  (My background in criminology helps me here.)  It's absolutely critical to read people, both in real estate and in life in general.

But what I won't do is expect the worst from people as my starting off point.  I cannot imagine how having that starting point must limit possibilities and relationships and horizons...and how it clouds our ability to see the sun that is in all of us.

I refuse to limit myself in that way...and to limit others' potential too by pre-determining a cynical motive and just waiting to be shown that I'm wrong.

I believe the world is full of mostly-good people just trying to find their way.  I'm one of them.

And yes, my glasses are rose-coloured.  I wouldn't have it any other way.

Good Morning Tanya, you make a great point!  Thanks for sharing it.

Good for you Tonya, you look rosy to me too because I have the same glasses on.  You get what you expect, and we expect good!

Tanya,  Good for You and your son!  A big thank you to the bus driver and whoever turned it in to him!  My opinion....If we habitually expect the worst from people...that is in fact what we will get!

Whether you expect the worst or the best you can probably find evidence to support that in people :)  Great points Tanya!

Good morning to you too, Dan.

Rene, how can things look anything but rosy when you're on the beach?!  Love that pic.

John, yes it was the bus driver.  I will have to find a great way to thank him.

Diane, you're absolutely right...so why wouldn't we expect the best?!

Tanya, I am like that too, my husband thinks its gullible but I do believe most people are good. My kids too follow my ways, My daughters won't except money for babysitting if it was a medical necessity for the mom, and my son has proven it to when receiving too much change and returning it to the cashier. He also shovels snow for others (like his teacher with a bad back) and won't take the money. What and see how your son grows by your example.

Valerie, being human and all, we do like to have our beliefs confirmed, don't we? Great point.

Good morning, Tanya....you have a 50/50 shot at seeing that ipod again.....it depends on the "need" of the person who found it....if it's a needy person, and that person thinks you DON'T need it more than he/she needs it, you'll not see it again....that's not negative, it's realistic.

I disagree, Barbara.  It's negative.  It's assuming that the other person will put their needs before someone else's, even if it means doing what they know is morally wrong.  And I don't think most people do that.  I just don't.

These are tough times for so many people that I think the percentage of people that would return that ipod has gone down....BUT...I would like to think that their are more good people than bad out there.

Tanya, maybe I have had a very fortunate life, but the overwhelmingly vast majority of people that I have come across have been good people. Most of the let-downs in my life have been caused by myself. Of course I have come across the occasional stinker, but not enough of them to change my opinion of mankind.

Do you own HD rose-colored glasses?  I don't think it's a matter of good or bad about people necessarily.  I think we're in unchartered waters regarding the depth of brokenness.  Cherise and I try to get our nourishment spiritually so we can love others regardless of the outcomes.  And Tanya, I admire that you look for the best in people.  Practically, I am trying to do the same.  Also, I'm cognitively putting a smile on my face daily regardless.  I really like your honesty... g

Malcolm, I agree wholeheartedly.  That has been my experience too.

You are Cherise are such soulful people, Gordon. You add grace to my blog.

Mwa, dear lady.  It's not unrealistic to expect the best in people - it's the only damn thing that makes life truly worth living.  That bit of innocence that so many of us lose by virtue of having gottend burned a few times too many was a necessesary ingredient of our happiness then.  Nothing wrong with holding on to it.  God knows as cynical as I am in many ways, people, by an large rock, and i'll take that belief over pretty much anything else.  To live with the expectation of our fellow human being sucking can't possibly be a joyous life...or a passionate one.  xoxo

Great post, even an old grump like me still beliefs that people want to be good, but we have been so reprogrammed to expect the worst and hope for the best, that we have all become scared of each other.

Just apply the golden rule, and it is amazing how it changes how others will act around you...

Hi Tanya - I'm with you! Look for the good, expect the good, and most times, you find it. And, sometimes with this kind of expectation, you help people change their attitudes and lives.

I totally agree with you - I always say lead with the expectation people are doing their best and not out to "get you."  Who would want to live with that kind of outlook?  Not me!

What a healthy way to look at people and life. I'm not sure I always expect the worst, or best in people. I do think most are generally kinda nutty. But that is what makes the world go round 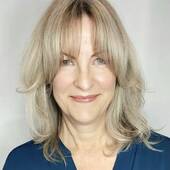