They must not have gotten the memo. Maybe they have not watched any cable news or read the newspaper or gone online for the last half a year. Either that or they refuse to believe it.

Some in our country still refuse to see it, but the "cut spending our money" crowd is not going away. And these idiot legislators in Wisconsin are simply proving to the entire nation that lots of our more liberal, and some conservative politicians still do not get it.

The state of Wisconsin has a budget problem. Not enough money. What else is new. So what do the liberal Dem's leaders of that state do:  They leave! Instead of doing the people's business, which they are being paid to do, they run away.

I wonder if they are  even smart enough to realize that the legislator is still running? Costing the good folks of Wisconsin money everyday. Paying for a broken machine that cannot operate because some little kids will not get their way.

The movement towards cutting gov't spending is here. It is not going away. Any politicians who continue to think they are above that will be done away with. It is coming to a town near you, and them.

Hi Kevin - It is unbelievable how stupid those politicians are.

They are stupid and childish I would submit. I cannot believe they got elected. Hopefully they do not ever again.

Gov should have the National Guard on the highway BACK from whereever they are to ARREST them and ESCORT them to WORK!

Wallace- I agree. They are not doing what they are being paid to do.

It only seams to get worse and worse.  Common sense is no where in sight.

They do not seem to get it. They want the folks who are having troubles getting jobs or making lots less than previous years to pay for them. Clueless.

The issues are out front and center and the politicians seem to ignore them.  Well, ignore at your own peril!

Now the media is trying to convince some of the GOP legislators to back down. Hopefully they do not back down.

Why don't the working legislators pass a law that anyone not reporting to work will be fined $10,000 a day?  All fines would go to reduce the state's debt.

Wonder how long these tantrums would continue?  =)) 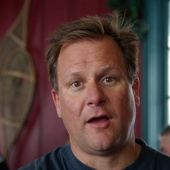