At a recent inspection of a FNMA owned home in the Bellevue, Everett, Seattle area, I noticed a prior drywall repair to the Kitchen ceiling. There was a substantial amount of cosmetic repairs recently completed including new paint.

The shower was run for approximately 15 minutes then turned off. After about another 30 minutes later, I checked the ceiling with my infrared camera.  There was a small cold area which may be an indication of moisture. I ran the shower for another 15-20 minutes and turned the shower valve off. The area in question grew in size. Another area also appeared. After another 30 minutes (no water running), the area has grown to approximately 4' x 4'. I expect there is a leak at both the shower drain and the valve (when in the active position) or the pipes to the shower head.

My moisture meter did not indicate a problem as the moisture had not yet made its way into the drywall. It is not likely that the active leak would have been found without the infrared camera.

When I left the home approximately 3 hours after first turning on the shower, there was no visible evidence of a shower leak other than the clue provided by the prior drywall repair at the ceiling.

We should all have our homes inspected like this, cause you never know what it happening in your walls until it is too late.

Thanks for the heads up Kevin.

Kevin, they sure are lucky to have you doing the home inspection.  I have never seen an inspector use infrared camera, going to add that to my list of questions for clients to ask.  Thanks for the information, I will definitely use it. 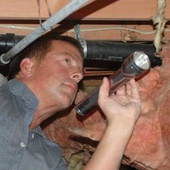