At the declaration of World War II in 1941, the nation was put on alert for foreign invasion. Over the entire country, on the East and West Coasts, groups were formed for the safety and protection of people in all communities. Men and women were selected from each neighborhood to form a Civil Defense Patrol.

In the Court, it was decided a meeting place had to be found where the workers could hold gatherings and to store equipment. One of my former listings, the dwelling known as 345 Lexington Road, was chosen because it had a basement, and was one of the few places that could be entered from the outside without going through the house.

Shelves and racks were installed in the basement to hold the steel helmets, special flashlights, stretchers, splints, and other first-aid equipment needed in emergencies. Thick black shades covered all the windows and doors of homes on the Court.

When Sirens wailed in the night, Wardens reported immediately to pick up their helmets and lights. Streets were patrolled to insure that no light was visible from any building and to verify that everyone was off the street. It was something right out of Frank Capra's "It's a Wonderful Life".

The wardens stayed at their posts until the "all clear" signal was given. Then they returned to headquarters to replace the equipment (and perhaps socialize).

World War II ended with a community drawn closely together by a common interest. It was decided by the group that they should remain together, meeting in the same place, but calling themselves the Stonewall Court Civic Association.

The purpose of the new association was to further the community interest in civic affairs and to encourage a friendly relationship between all families.

The people who have come to live in the Court continue to pick up the torch by carrying on the ideals and sprit of the Air Raid Wardens of 1941. This is a vibrant neighborhood with a close, caring community; it is one of many in the area I am happy to represent!

[Source of Information provided through the Stonewall Court Civic Association]

Interesting post.  I hope real estate is treating you well, have a great fall season. 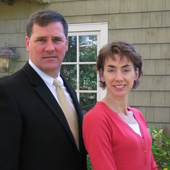