The #3 ranked Benton Central Lady Bison overcame a first half deficit and fought back in the second half to take the lead from a much taller, #1 ranked Evansville Memorial team.

The Lady Bison withstood a furious Evansville rally and had a chance to win the game on a last second shot that fell short, as the game ended in regulation in a tie!

The #1 ranked Tigers never looked back and clawed their way to a 58-50 overtime win over the Bison.

Senior Hillary Moore led the Bison with 12 rebounds and six blocked shots against the taller Tigers.

The greater Lafayette area is proud of the Lady Bison for their incredible defensive play, outstanding hustle, and impeccable sportsmanship!

Sounds like a very exciting game, overtime and all!  You know my Uncle lives in Evansville..please don't hold that against me.

Sharon and Bruce---You must attend all of these games the way you are able to do a play by play report!  Are your kids playing in any of these sports?

P.S.  I just love your photo.  What a good looking couple!!

Hi Mary, it was a very exciting game to watch, and both teams left all their energy and hustle on the floor at the end of the game.  Perhaps Kentucky should annex Evansville(they do have land NORTH of the Ohio River next to Evansville and then they wouldn't be in our state tourney!  ^_~)

Hi Pat, I did watch the game and keep stats so it was very easy to write a short account of the game.  I do agree that Sharon looks great;  I always seem to spoil the picture!  Thank you for your kindness!

Hi Scott, I think you should move to Indiana so your kids can share in the excitement of our basketball heritage.  ^_~   Indiana is nuts about basketball!  I helped coach girls basketball and it was 18 years ago last weekend that we played in the state championship game before over 16,000 people.  Talk about excitement!!!

High school basketball is so important to the youth that play in it.  A wonderful teachign mechanism.  Nicely done.

Thank you Judi!  The Benton Central girls basketball team are winners even though the final score did not show that in the championship game.  They have so much to be proud of and they gave all the effort they had!  That is what a winner is! 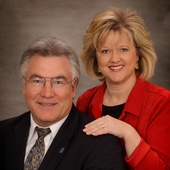