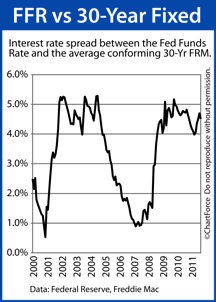 Usually, events like this would lead mortgage rates higher, but violence in the Middle East and worsening fear for public safety in Japan took center stage instead, spurring a massive, global flight-to-quality instead.

As safe haven buying increased last week, conforming mortgage rates dropped, falling to their lowest levels since January. It marked the 5th straight week through which mortgage rates improved and is the longest such streak since August 2010.

This week, rates may run lower again. You may not want to gamble on it, though. Here's why.

So, last Tuesday, the Federal Open Market Committee met and in its post-meeting press release, the group said inflation pressures were building, a signal that rates should rise. It then went one step further.

To keep the economy from slipping back into recession or into disinflation, the FOMC also said it plans to keep its existing monetary policies in place for the foreseeable future.  This, too, is considered inflationary -- another signal that rates should rise. And they did.

Starting Wednesday, the battles in Libya grew more intense, and Japan battled with its own domestic crisis (i.e. a potential nuclear meltdown). The economic implications of the events spurred the purchase of "safe" assets, and mortgage bonds improved.

And this is why mortgage rates won't stay low for long.

Eventually, Wall Street will come to terms with Libya and Japan and the flight-to-quality will reverse. Inflation, however, is not likely to lessen. At least, not anytime soon.  Therefore, this week may represent the low-point in mortgage rates for a while. It's important to lock your low rate while you still can.

There isn't much economic data due this week so mortgage rates will take their cues from the broader market. If you haven't locked a rate yet, or were waiting for rates to fall, this might be your best chance. Call your loan officer as soon as possible and get a fresh rate quote today.