The winter of 2010 - 2010 was indeed a hard one here in Connecticut. Record setting snow fall has caused untold damage. Ice dams and leaks were extremely prevalent after the first big storm. More snow came and roofs started to collapse.

While doing a home inspection yesterday, I saw a few reminders of the damage caused by the snows, now thankful gone, of this past winter.

Scaling my ladder I first spied the tell tale stains of ice damming on and just under the soffit. I asked the homeowner if she had any ice damming related water leaks over the winter. Her response was a quick and resounding, "Yes!"

Yep that's what I thought.

Getting on the roof I began heading toward the chimney over to my right going towards the back side of the house. As I approached the chimney I noticed the garden shed in the neighbor's back yard. It was obvious the shed had a peaked roof, which was now some where between peaked and flat. It was plat.

As I started making my way back towards the front of the house another building across the street grabbed my attention.

I do love the bird's eye view from a roof.

An old garage with front section of its roof imploded. Yet another casualty of this winter.

While I gazing at the now inverted roof in the garage, I caught glimpse of yet another fallen roof just behind and to the right, once again on or should I say in an old garage.

I am so glad the snow is gone for another winter...What's that? More snow predicted for Friday....aaaaaaaaaaaagh!

To find out more about our other high tech services we offer in Connecticut click on the links below:

James - another reminder why I love Jacksonville Beach, FL, after growing up in Northern New Jersey - the winters were (and apparently still are) unpredictable; some years lots of snow, and then you buy cross country skis...and....no snow....

I agree with Carol the South rules during the winter.  I wonder though if down here our inspectors would think about ice dam damage.  We had a week, almost two, of severe winter weather and could have experienced this.  Thanks again for another great post.

And this is the reason I moved down south from the northeast. The snow looks beautiful, and if could snow in the summer, I'd love it! But the cold and the damage.... NOPE! Not for me anymore!

Jim, ahhh yes---and this time of year it is the REALLY wet heavy stuff.

Seasons like these show up weak areas of buildings that have just been lucky so far.  Just because its' been there a while doesn't mean it always will.

James, we had all the same problems here! Major businesses with flat roofs imploding and we still have 3 foot piles of snow. Luckily we have rain predicted, that should take care of some of it!

Wow, that is a lot of damage!  Good view of it all from the roof.  Good thing there was no tsunami...

The amount of damage inflicted by the elements can be shocking for sure.

James, local damage there was heavy (pun intended) it seems!

Jeremy if you like that you might look up the german or french word s for flat.

I did, and apparently that is the French word for flat.  Ha!

Carol, Exactly! Last winter we hardly had any snow at all.

Gary, I doubt that's a concern for the home inspectors down your way.

Craig,I'm sensing you have a distaste for the cold and snow of the Northeast :)

Charlie, It sure is!

Robert, No matter what, nature will win in the end.

Peg, Rain never sounds so good as when you know its going to melt all those big piles of snow.

Jay, I love tsunami sandwiches. I could have sat up there and had lunch ;)

Jeremy, Seen a lot of this type of damage around this spring.

Robert, Is that right? How funny. I had no idea.

Yes, its the word for 'flat' in both French and German. So it should be no surprise that a place called Plattsburgh (NY) should have an airport and an air force base.

I've been seeing those same tell-tale leakage marks on a lot of houses lately.  It's nice having that evidence left behind, isn't it?

Reuben, Yep. I do like the markers. Sure helps with the inspection. 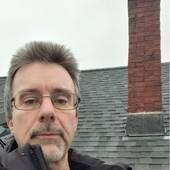