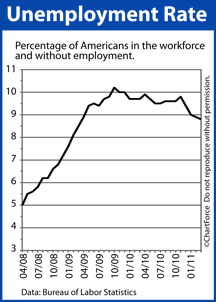 The 12-month average is slightly less than two per day.

Expect the volatility to continue into this week, too. With little economic data due for release, mortgage rates should move on momentum. This would be good news for rate shoppers and home buyers throughout Illinois because mortgage rates ended last week on a downswing.

It's all because of the March jobs report.

The jobs report is important to the economy because as the number of working Americans grows, so does total earned wages nationwide. In theory, this leads to higher levels of consumer spending, and to larger government tax receipts.

It starts a cycle in which businesses and governments additional workers and the cycle continues.

The U.S. economy added jobs in March for the sixth straight month.

Mortgage rates are 0.69% higher today as compared to their early-November 2010 lows. The jump has added 14 percent to the 30-year, long-term cost of homeownership in Chicago. However, as compared to history, rates remain low.

If you're currently shopping for a mortgage, talk to your loan officer about today's market and its risks. Rates may not rise this week, but they're poised to surge along with the economy. Consider locking in today.