Drawbacks Starting out here at ActiveRain in a photographer's role verus my other life here as a mortgage professional, I figured I would discuss some of my experiences with the two main types of cameras real estate agents, and most others, use in their everyday and professional photography.  While I go into great detail about megapixels and models of cameras, virtually endlessly, I am just going to cover the broad categories of Point and Shoot and DSLR cameras.  I am also going to limit my discussion to digital cameras as film cameras are virtually non-existant now.

First off, I guess I better clarify the two types.  Point and shoot are those that do not have interchangable lenses, while DSLRs can change lenses as the user sees fit.  Both have a wide variety of features, from zoom to megapixels, to sensor size, and so on.  Many point and shoot cameras rival some DSLRs, even in price.  But as the saying goes, you get what you pay for, and that is not limited just to the camera, but also to the person holding it.

Not too long ago, DSLRs were so expensive, they were not even an option.  Heck, ten years ago, point and shoot cameras were not cheap to come by either, not to mention us die hard photography buffs were hesitant to use them to great length.  I did purchase my first digital camera in 2001, used for $250.  It was a Minolta Dimage S304 with a 4x optical zoom (don't remember the "digital zoom") with 3 megapixels.  One thing to keep in mind, DO NOT EVER use the "digital zoom" as you are almost always better off taking the picture and cropping it instead.  Despite the advances in technology since then, one thing seems to never improve in point and shoots...the time it takes to focus!!!

Over the last 10 years, I have owned 5 or 6 point and shoot cameras and 2 DSLRs.  If you decide to go to DSLRs, there are some added factors you need to take into consideration even beyond the cameras ability.  I will get into that later.  Nevertheless, I have taken untold amounts of images over the ten years, covering all types of photography, so my experience level accounts for something these days, and not just from shooting, but from studies as well.  So, let's dive into the main reason for this post...

Benefits of Point and Shoot Cameras Drawbacks of Point and Shoot Cameras I know you can probably come up with more benefits and drawbacks for each type of camera, but those are the big ones.  You probably already knew some of those anyway, but they are worth examining again, especially if you are looking to buy a new camera.

But the real difference between the two comes down to overall quality of the image.  While many point and shoot cameras are now utilizing the same sensors and image processors to capture the image as an entry-level DSLR, even the those DSLRs are better "capable" of taking higher quality pictures.  Notice I said "capable".  So, repeating that favorite phrase..."you get what you pay for".

I just mentioned "capable" above for a good reason.  Anybody can take good pictures by buying a camera, flipping the "dial" to that "green" mode (whatever icon is used) and shooting away.  However, not everyone can achieve great or impressive pictures that way, and most digital camera users have no idea how to utilize the manual settings to their benefit.  Great pictures not only come from better equipment, but from those whom studying how best to use that equipment.

(PS - I first wrote this earlier today on my new AR profile, but that is limited to members only)

I'm a Canon gal. Love my DSLR and once I've gone that route, I can't go back.

Like allot of things, it comes down to both what you're comfortable with. DSLR is always better unless it's sitting on the shelf else where! I carry a good point-n-shoot most of the time, but when I get serious I drag out my 35"s. 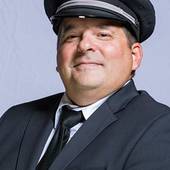