The National Breast Cancer Coalition (NBCC) is a grassroots organization dedicated to ending breast cancer through action and advocacy. NBCC members are committed to reaching this difficult goal. Following are some statistics that speak to the need to end this deadly disease: Just in case ... sources & info are included.  Still SOOOooo many myths out there check out www.nbcam.com as well for lots of great info  .

1In 2007, approximately 2,030 new cases of invasive breast cancer will be diagnosed among men in the United States. Approximately 450 men in the U.S. will die from the disease.

2This statistic was obtained by studying women who were diagnosed with breast cancer 20 years ago. It is impossible to know what the 20-year breast cancer survival rate will be for women diagnosed today.

4Mortality trends have only been analyzed up to 2003.

It is Pink for October and I guess we'll have to wait until next year to Navy Blue for Prostate Cancer Awareness.   Hopefully men can find an organization to promote Prostate Cancer Awareness.  I think I'll write a letter to the NFL since they are promoting Breast Cancer this month. We need to rid the world of all forms of cancer in our lifetimes.

I'm  just curious are cures seriously being developed or are organizations responsible for research just milking patrons.  If a cure is found, why would we need to continue to make pledges and contributions.  In fact these organization would have to die or change their focus.  Either their financial coffers will suffer as they build up the awareness for the next cause.  I sometimes a feel a little concern that these organization can be self-serving.

Typo for the word breast in the caption.

October was Breast Cancer Awareness Month, which is an advertising campaign for national mammography screening.

An eminent radiologist, Leonard Berlin MD says this message fails to disclose the limitations of screening mammography, namely that mammography will miss 30-70% of breast cancers, and leads to over diagnosis and over treatment.

The reason is that the same limitations for lung cancer screening apply to breast cancer screeening.  Missed cancers, overdiagnosis and overtreatment.

Dr. Berlin says disclosures should be mandated, just like the cigarette and drug warnings that appear on their ads.

Dr. Berlin also points out that 57% of the American women believe that mammograms prevent breast cancer, a misleading message from Breast Awareness Month.

Mammograms are designed to detect cancer, not prevent it. Thinking that a mammogram can prevent breast cancer is like thinking that checking your house annually for broken windows prevents robberies. 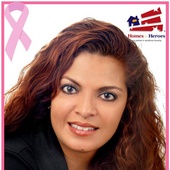 over 13 years ago
bookmark_borderbookmark
I have properties ... that need tenants ... :-)
View more Recent Posts   arrow_forwards