There are several valuable data points contained within comScore’s 2010 Mobile Review, but the one that hit home with me involves ‘social networking ecosystems’.  The first few sections of the report illustrate the expected mobile metrics: rise in smart phone users along with rise in mobile media access, Europe hosts a more developed mobile market than U.S., and so forth.  But at the end of a paragraph about smart phone buyer criteria, comScore re-branded a concept we’ve been discussing since 2008:

“Smartphone users are increasingly sophisticated consumers who are looking not just for a phone, but for a device that is part of a larger ecosystem that provides a complete mobile experience, including apps, music, and video.”

I remember the day in 5th grade when the concept of nature’s ecosystems finally hit home with me.  We were discussing swamps and I remember the moment of enlightenment during which I grasped the scope of an ecosystem – an unending list of seemingly independent parties (frogs, snakes, or, for the sake of this discussion, networks like Facebook and Twitter) that only achieve success by working together in concert.  When one of the parties is taken out of the environment, the rest will either fail or fill in the missing component with a like-minded organism.  Cohesion between organisms ultimately begets a rounded and functional living environment.

This idea is easily applied to social networking.  At this point in the networking realm, those without blogs are behind the curve.   Likewise, the very consumers they serve are leaving those who deny the important role technology should hold in their business model behind. So let’s assume that the majority of profitable agents today maintain some degree of a social network.  I don’t need to reiterate the importance of transparency and the Golden Rule, and I don’t need to re-hash why you should have a profile on multiple networks pointing to a central hub, etc.

I also don’t need to discuss the prevalence of mobile technology and the consumer demand for mobile information retrieval, but I will.  As detailed in comScore’s report, approximately 1/3 of all U.S. mobile subscribers have an unlimited data plan.  While the U.S. market is behind Europe and Asia in terms of new tech adoption, 18-34 year olds make up 43.9% of mobile subscribers in America.  Traditionally, this age bracket has been known for texting (SMS), emailing, and requesting mobile information to a higher degree than the rest of U.S. subscribers.  comScore also reports that 68% of mobile users in the U.S. named ‘SMS’ as their top mobile activity.

I will also stress the importance of utilizing relevant technologies to communicate with potential buyers and, at the very least, get them plugged into the rest of your social networking ecosystem.  To enjoy the fruits of an effective networking strategy, you must establish a transparent message that is verbalized through content syndication, as well as maintain ‘points of entry’ so the public can easily access your ecosystem.

As Joel Burslem says in his post for 1000Watt, an effective online marketing strategy will reward the viewer for their click-through by providing an applicable, media-rich experience.  In the past, online advertisements such as banner ads have been used to drive traffic to agent websites and blogs.  At this point in our internet arena, the click-through rates for email and online ads are suffering.  SMS and QR codes are the avant-garde technology, the “shortest distance between curiosity and info retrieval”, according to comScore.  The click-through rate for SMS is staggeringly high, and therefore can be effectively used to drive traffic into your existing ecosystem.  Standalone SMS advertising is debatable in its effectiveness, but when used in concert with the rest of your marketing SMS advertising is all part of a complete ecosystem.

The methods consumers rely on to request and access information are continuously evolving.  The need for audiences to be rewarded for their time, however, will never change.  comScore has this to say:

“But in order to establish the mobile channel as a legitimate advertising medium, all parties require access to [a] transparent measurement of the mobile ecosystem.” 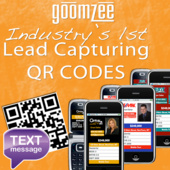