I found this article to be most interesting, it debunks many theories I have held close over the years . . .

Come On, I Thought I Knew That!

Trick question: Is it easier to remember a new fact if it appears in normal type, like this, or in big, bold letters, like this? 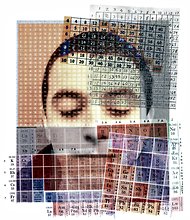 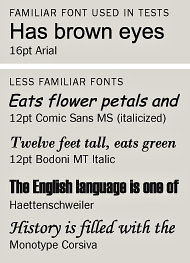 The answer is neither. Font size has no effect on memory, even though most people assume that bigger is better. But font style does.

New research finds that people retain significantly more material — whether science, history or language — when they study it in a font that is not only unfamiliar but also hard to read.

Psychologists have long known that people’s instincts about how well they’ve learned a subject are often way off. The feel of a study session can be a poor reflection of its nutritional value: Concepts that seem perfectly clear become fuzzy at exam time, and those that are hard to grasp somehow click into place when it counts.

In recent years, researchers have begun to clarify why this is so, and in some cases how to correct for it. The findings are especially relevant nowadays, experts say.

“So much of the learning that we do now is unsupervised, on our own,” said Robert A. Bjork, a psychologist at the University of California, Los Angeles, “that it’s crucial to be able to monitor that learning accurately; that is, to know how well we know what we know, so that we avoid fooling ourselves.”

Mistakes in judging what we know — in metacognition, as it’s known — are partly rooted in simple biases. For instance, most people assume when studying that newly learned facts will long be remembered and that further practice won’t make much difference. These beliefs are subconscious and automatic, studies find, even though people know better when they stop to think about it.

Yet overconfidence also develops as a result of the brain’s natural tendency to find shortcuts — and to quickly forget that it used them. In a recent report in the journal PNAS, researchers at Harvard and Duke had college students take what they thought was an I.Q. test. Some got an answer key with the test “to check their answers afterward,” and others did not.

To no one’s surprise, those who got the key peeked at it and did better on the test, on average, than those without it. But after grading their tests, both groups of students predicted how well they would do on a hypothetical longer test without the answer key. Those who had seen the key expected a far higher score on the future test than did those who hadn’t.

“The finding was that people who use an answer key when taking a test see their score as a sign of their innate ability, selectively forgetting that the key helped them achieve the score,” said the lead author, Zoe Chance, a doctoral student in marketing at Harvard Business School.

Without the answers handy, those confident students did no better on an actual second test than the others.

Anyone who has ever peeked at the answers at the back of the physics or chemistry textbook already suspects this. It’s one thing to study a solution when the problem itself is totally unfamiliar, requiring techniques that haven’t yet been learned. It is another to scan the answers when problems are familiar but difficult. Those problem sets go more smoothly, confidence goes up, the temptation to take a study break grows stronger.

Even hints or answers that are not consciously remembered alter how the brain processes a problem or question, making the experience very different from an unaided exam question. In a 1996 study, researchers at Macalester College and New York University had subjects solve 60 anagrams and rate how difficult each one would be for others to solve. One group of participants had already seen the answers to half of the puzzles in an earlier phase of the study, scattered like so many detective-novel clues in a long list of random words. As a result, they solved those anagrams faster and rated them as significantly easier to solve than the other half — without consciously remembering having seen the answers.

“Studying something in the presence of an answer, whether it’s conscious or not, influences how you interpret the question,” Dr. Bjork said. “You don’t appreciate all of the other things that would have come to mind if the answer weren’t there.

“Let’s say you’re studying capitals and you see that Australia’s is Canberra. O.K., that seems easy enough. But when the exam question appears, you think: ‘Uh oh, was it Sydney? Melbourne? Adelaide?’ ”

That’s why some experts are leery of students’ increasing use of online sites like Cramster, Course Hero, Koofers and others that offer summaries, step-by-step problem solving and copies of previous exams. The extra help may provide a valuable supplement to a difficult or crowded course, but it could also leave students with a false sense of mastery. 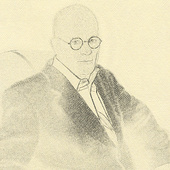