Saying No is not always easy.  We know that if it is illegal, immoral or will hurt someone, we will say no.  There are other times that it is not so clear.

I recently attended a meeting where Richard Flint was a featured speaker.  Mr. Flint is a highly regarded motivational speaker.  I bought his tapes as well as his daily "morning minute".  The other day, Mr. Flint's message was on the "power of saying "no" and not be afraid to use it".  He went on to say that "as much as most know when they should say "no", most are fearful of saying it.  "No" is a term that keeps you in control of your life.  When you can't say "No", you give others permission to emotionally dump on you."

This reminded me of my many years as a volunteer.  The most valuable lesson I learned was to say "no".  If I didn't, I became overwhelmed with all I had taken on.  Stress led to chaos and ultimately failure in some of the things I was doing.

Today, I have found that I need to pick and choose those things that are truly important for my personal and professional well-being.  If I take on too much, none of it is done well.  I respect people who say "no"; I hope they will do the same for me.

I love to say no!  I received a referral from within my company last week for a large listing.  I think the other agent and the seller were shocked when I told them "no thank you, you want $100,000 too much." 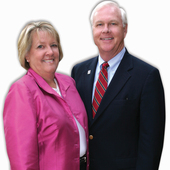