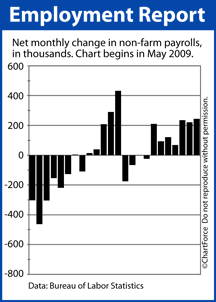 Mortgage markets improved last week on a bevy of economic and geopolitical news. Conforming mortgage rates in Chicago improved, falling to their lowest levels of 2011.

It's a welcome development for home buyers and rate shoppers nationwide. Mortgage rates were expected to rise throughout most of this year.

There were four big stories that contributed to falling rates last week.

The first was the news that Osama bin Laden was killed. The news was announced over the weekend, and by the time markets opened Monday morning, the price of oil was already falling. Falling oil prices reduce inflationary pressures on the economy and because inflation contributes to rising mortgage rates, the absence of inflation helps them to fall.

This news carried markets to Thursday morning. That's when the Department of Labor announced that Initial Jobless Claims had suddenly and unexpectedly surged to an 8-month high. Last week's report featured the biggest one-week jump in claims in more than 2 years.

This, too, pushed mortgage rates lower, casting doubt on the strength of the U.S. economic recovery.

Then, Friday morning, those doubts were cast aside. When the government released its Non-Farm Payrolls report for April, it showed job creation topping 200,000 for the third straight month. We would have expected mortgage rates to rise on news like this, but they didn't.

Rates fell instead -- mostly because the strength of the U.S. jobs report rendered mortgage-backed bonds more attractive to global investors.

The last story, though, is the one worth watching long-term.

Late-Friday, in response to its growing debt issues, it was reported that Greece may withdraw from the Eurozone. An outcome such as this is unlikely, however, the possibility was enough to spark a flight-to-quality that benefited U.S. mortgage rates. Conforming and FHA rates ended Friday lower, reaching their best levels since December.

This week, there isn't much economic news set for release so the above stories will continue to influence markets and rates. Geopolitics can change quickly, though, so if you're floating a mortgage rate and waiting for the bottom, don't wait too long. Markets can reverse in a snap.

If you see a rate you like, the safest move is to lock it.