This seems like a great idea to me. You would be able to see what it is like to live in different parts of the world without actually selling your current home or having to pay moving costs. Now where in the world would you want to house swap first? Decisions, decisions, decisions…

from International Living
By Darius Fisher

Imagine you could live abroad rent-free…no hotels, no guesthouses…your own home for a week, a month or more. Where would you go?

We picked Amsterdam, swapping our house just north of New York City for a four-story canal-side home in Jordaan, the hippest part of the city. 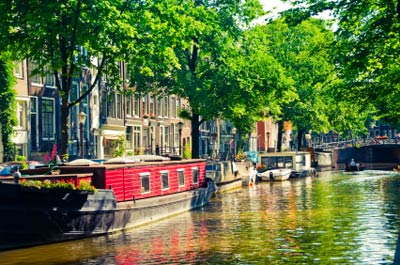 Over three glorious weeks, we munched cumin-speckled Gouda from the local cheese shop, biked along cobblestone streets, sipped wine on our doorstep, and got to know the Dutch capital.

The best part was, we lived rent-free. Since the 1950s, house swapping has been a unique way for trusting globetrotters to travel on the cheap.

Rather than shell out for accommodation, house swappers open their homes to strangers, often worlds away, with the stipulation that they return the favor. Cost savings range, but for a European vacation, an exchange can save you over $800 a week on hotel expenses. Often swaps involve more than just a living space, too. Some trade cars, pets, gifts and occasionally friends.

We left our car in exchange for a motorboat we used to cruise the canals. Our Dutch friends took care of our dog; we tended to their cat. My pals in New York introduced the Dutch family’s son to buffalo wings while I played poker with his buddies in Amsterdam.

We thought we’d snagged a deal: A house in humdrum suburbia for a chic pad in one of the world’s most charming cities. To our surprise, our Dutch counterparts shared a similar opinion: They’d lucked out. In a note, the Dutch mom said, “We enjoyed every minute and our only worry was whether you were as pleased with Amsterdam and our house as we were here.”

That’s because house swapping isn’t just about a physical home. It’s about exchanging a cultural experience and learning how other people live. What’s become the norm for you could be unique and inspiring for a foreign visitor.

In the past, linking up with like-minded swappers wasn’t so easy. But the Internet created new companies that have made swapping a comparative piece of cake.

Gwen Terpstra, an artist from San Francisco, has done five home swaps and spent three weeks last summer in Paris and Menton, in the South of France. She figures she’s saved $6,000 and has only had good experiences. Her worst hassles were an apartment with only one key and a territorial cat that peed on her daughter’s luggage.

Seasoned swappers often have long dialogues with their potential exchangers to discuss expectations. In our case, our families e-mailed back and forth for six months to hash out every detail.

I'm always intrigued by this idea but I don't have a perfect clutter-free house to share.

I laughed out loud when I read your comment because I had just thought that same thing about my house. Who would want to stay here with all of my "stuff"? Just a dream.