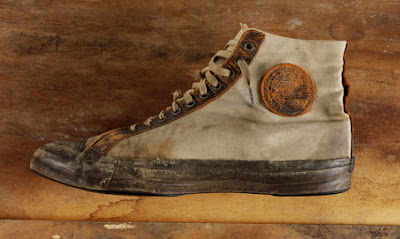 The following is an Associated Press release dated June 2, 1927:

"Grants Pass, Ore., --Eight runners of the Karuk tribe of the lower Klamath region are in training here for the longest marathon on record to be run over the Redwood highway from San Francisco to Grants Pass, starting June 14th.  The runners are under direction of two trainers and are working out daily over paved highways near this city to get used to the type of road to be encountered on their long jaunt.  Camp has been established in the city park.  Tribal names of the runners are Flying Cloud, Mad Bull, Fighting Stag, Rushing Water, Thunder Cloud, Big White Deer, Sweek (Eagle) and Falcon.  The eight will run under the colors of the Oregon cavemen." 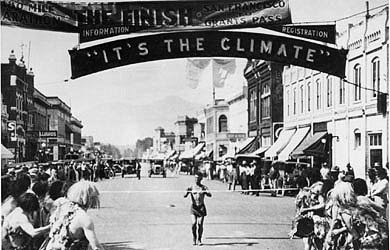 Johnny Southard (Mad Bull) won the 1927 Redwood Marathon when he crossed the finish line in Grants Pass after seven days, 12 hours and 34 minutes.  The grand prize was $1,000 in gold.  One of the runners from New Mexico was reportedly in his late 50's.  In 1928 there were 29 men who entered the race; Henry Thomas (Flying Cloud) was the winner, and he took home the prize of $5,000.

You can read a full account of these marathons in the book "Golden Memories of the Redwood Empire" at Google books: Redwood Marathons

As someone who used to be a long distance runner, I can't even imagine running that far in even in that few of days. That is a lot of miles and is real hard on the body!