Lisa Yako has a unique calling.....she is a House Detective.  Her job as an historical researcher  can tell youwho owned your home over the decades, what kind of work they did, and what the people were they like.  She has researched more that 30 homes including the Old Stone House on the Gammie and Quarry Hill Homestead and the homestead of Sharon Barnes, owner of Barnes Nursery in Huron .  This is one of my favorite articles from her blog, http://www.historicalresearchpartners.blogspot.com/ 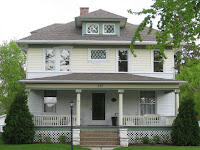 Picture this: a hot summer day, a fresh lake breeze, and the chirp of crickets and the song of cicadas. Next, add a dose of tangy lemonade to be shared with good friends. Where would you place this scene? For me, the perfect setting is a beautiful front porch equipped with a squeaky swing and some wicker furniture. For centuries, Americans stayed in touch with friends and neighbors while staying cool on their front porches. The exact origin of the porch is unknown. In America, the addition of a front porch took hold first in the South where its function was two-fold: to cool the house by sheltering the interior rooms, and to provide a place for all social classes to relax and escape the intense heat of the sun.

Following the Industrial Revolution (1820-1870), porches became more commonplace due to greater affluence and machines that made building a house less difficult. In addition, shorter workdays afforded Americans more time to enjoy their families and their homes, while also enjoying the outdoors. 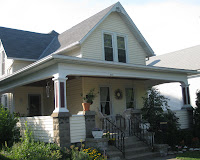 In Huron’s Old Plat neighborhood, the houses with the most impressive porches appeared during the Victorian Period (1840-1900). These porches typically contained elaborate spindle work and were often painted with multiple colors. Porches, which provide a link to the outdoors, fit well with the Victorian Period’s emphasis on healthful living and outdoor activities. Further, the rapid spread of tuberculosis during this period drove people outside in the pursuit of fresh air.

In subsequent years, the popularity of the front porch continued as house styles changed. Most houses for the next 50 years after the Victorian era contained porches. In the Old Plat, front porches are also found on houses built in the American Foursquare and Craftsman styles.

As our modern society progressed and air conditioning and televisions became more common, people withdrew to the indoors. In addition, houses in the post World War II society were being mass-produced without much regard for ‘extra’ architectural elements. People began to crave their privacy and no longer used their porches as a means of staying in touch with neighbors. Though porches did make a comeback for a brief time period, it is doubtful whether they will ever regain the importance they once held. Interestingly, there is a movement to re-establish the popularity of front porches and some planned neighborhoods are even requiring front porches as a means of neighbors connecting with one another. All in all, front porches remain a beautiful reminder of a simpler time and beckon us to sit down and watch the world go by. 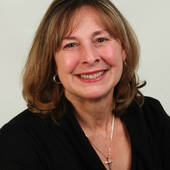