This upcoming weekend, once again the much enjoyed festival is slated to begin.

In downtown Mt. Clemens some changes will be instituted for the festival this year:
...no alcohol may be brought into the festival area--Period:
...all coolers will be subject to searches, for beer, wine & liquor;
...leave any alcohol in personal cars, don't bring it, or see it confiscated;
...parking lot attendants are directed to reinforce this knowledge by telling drivers /
passengers about the change;
...beer drinkers CAN purchase beer from various vendors within the area;
...this is in effect in part due to the fact that this is the kickoff for the Bud Light
Concert Series taking place at the same venue area--Friday is the 1st show in
the series;
...Funfest Productions--promoters of the festival have announced that a temporary
liquor license has been issues to allow [vendor[s] to sell beer in the park
with the proceeds, or a part thereof, to go to:
the "Care House-child advocacy Center" of Mt. Clemens.
..."Huntington Fireworks Brought to You by the Webber Foundation"
will start at  dusk.
...various food items--mainly picnic types--will be sold at the park.

The U.S. Army will officially swear in between 20 - 30 new soldiers in a recruitment ceremony.  This is included in the Stars & Stripes salute to the military.
A large military display will be on the festival grounds during the event.

There are many road closings, STARTING tonight at 6:00 p.m. TONIGHT;  Roadways that are impacted will reopen at 7:00 a.m. on JULY 5th.

You know folks--if YOU are planning to attend this festival for the Fireworks on Friday ---FOLLOW THE SIGNS; & YOU will be OK.

This Festival starts all the downtown fun in Downtown Mt. Clemens.
Come & join in.

Barb and Sal - road closures are always a nuisance but most people do not mind them for good causes.

Have A Super 4th Of July Weekend

Have a wonderful holiday weekend!

Barb & Sal, stay safe and watch those fireworks from a distance, then have a few sparks of your own! LOL

Kathy...Since this is 'after' the show, it appears that all had a great time; few mishaps with road closures and 1 group of teens; other that that, the storm was later & it was well attended over 200,000 fans. We had attended in earlier years, but not recently. We can see partial Fireworks from here. Thanks for your wish for a "Super 4th of July Weekend." how nice of you.  You too have a great Sunday and week  to come.
Barb

Roy...thanks and Right Back at You & Dolores. Hopefully your weather will cooperate; we had a strong storm last night and 98*, to boot.
Barb

Ellen...We did see parts of them from the distance; no sparks here,as we have been working outside getting things ready for the removal of the rose bush stump along with other tree trimmings.  True to our plans, the weather has been a tad hot for outside work, but the yard looks good. Just mentioned to Sal, some future plans to 'fix' the small section of backyard.  He turned a little green. --go figure.  It will happen, but will wait until the temps are out of the 90's. LOL
Hope that you all have a great Holiday.
Barb Russel...what a great 4th of July greeting;  I, too,hope that you & yours had a great holiday.
Barb

I hope you are having a great week! 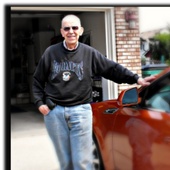 Life from our view; the forward View that YOU see from behind YOUR steering Wheel; We focus on the "taking control" in our life and passing on this same wish to all of you. >