Leaving south Tacoma this evening, I’m headed back to Interstate 5 and north for home in Renton. I’m anxious, it’s been a busy weekend and I still have things to do to get ready for work on Monday. It should be about a 45 minute drive...

“Duh... it’s summertime, what was I thinking?” Every-one’s headed north this Sunday evening, back to the Seattle megalopolis after a weekend escape.

I get off the freeway ASAP at the next exit opting for the back way home, River Road into Puyallup, then up the valley on Hwy 167 to Renton. Most likely I won’t save any time but the drive should be easy. The shadows are long just before sunset. I'll enjoy some great views along the way. 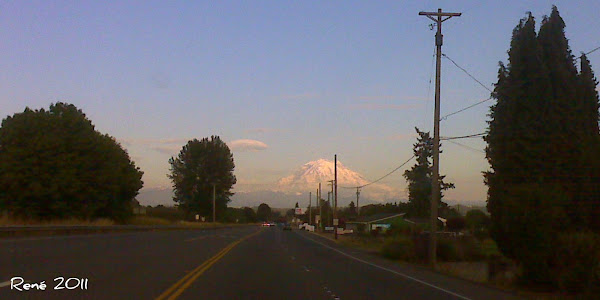 I’m in the shadows now and notice there's almost zero traffic. The sun is still lighting up Mt. Rainier (at 14,410 feet) after 8:00 pm in the background. (This photo doesn’t do it justice.) There are several places along this route where the mountain looks so huge, the illusion is you’re going to drive right up to the base.

I talked about early settlement in the Pacific Northwest in a former post July 8, 2011,
It’s all about the land. Puy-al-lup [pyoo-al-uhp] is one of these places where settlement began in the 1850’s. Ezra Meeker married Eliza Jane Sumner in 1851 and in 1852 with a newborn son Marian, came across the Oregon Trail by ox cart for a donation land claim to the Puget Sound area. They settled in Puyallup in 1862, where Meeker grew hops for making beer and made a fortune at it. 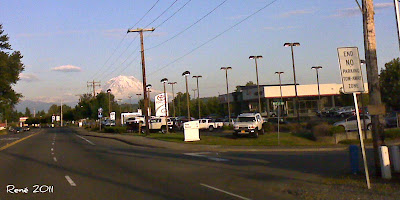 Ezra Meeker lived to be 98 years old (so beer can't be all that bad!). He was very active for numerous worthy causes to the very end of his life. Also, my X's grandmother ran a retirement home at the Meeker Mansion for several year's before it was designated a Historical Landmark.

Puyallup, translated from the native Salish language to English means, The Generous People, and they were and still are!

Rene, I know the picture doesn't do justice to the reality of being there and seeing the mountains. It's that way for me too, photos don't capture the immenseness or the beautiful colors. We don't have a mountain as majestic as Mt. Rainier, for sure. Thanks for sharing the history of Puyallup and your story.

Rene, While the picture may not do the view justice I can see that it is beautiful. Your feelings for Washington mirror my feelings for my home State of Maine. Arkansas is my second love as far as states go.

I take the back roads whenever I can, but rarely do I see anything as spectacular as Mt> Ranier in the late evening sunlight. And the story of the "generous people" is one of those bits of local history that I just can't get enough of!

Where were you when Puyallup was the city I wanted to forget most! It was my first day on the air and I had to talk about the Puyallup fair. Let's just say I didn't pronounce the name correctly and to say there was a few calls would be an understatement.

Pamela: True... plus my Blackberry isn't the most dynamic camera for landscape photography :O)

Charles: For me its Washington, but I love Oregon and Northern California... But everytime I go away for awhile I miss Puget Sound and the mountains...

Richard: Ain't she a beaut! I never tire of looking at Mt Rainier.

Todd: Pew-ee-al-lup is how many newbies pronounce it. Ha ha... I got numerous funny looks and corrections when I first started working in Oregon and tried to pronounce Scappoose.

I'm glad I could return the favor to a Washingtonian after what I had to deal with that first week on the radio in Washington.