There’s a little bit of psychology involved with being a real estate agent. You might not have noticed, but when they talk to a buyer about a purchase, it’s called a “home.” When they talk to a seller it’s referred to as a “house.” This choice in terminology is not accidental.

A home conjures up an appealing image of a personalized space where you live, raise your family, and decorate according to your tastes. Buyers tend to think in terms of whether or not they can see themselves living in a particular structure. A house is simply that – a depersonalized structure, one of many on the market at any particular point in time. As a seller, the sooner you can de-personalize your feelings about the home/house, the sooner you’ll do what needs to be done to get it ready for sale.

In short, buying is an emotional decision and calling it a home taps into emotions. We recently ran a three part series on how to get your house ready for sale, but the idea of making the shift from “house” to “home” is so important it bears repeating.

The goal is to de-personalize the property but leave a bit of personality. Sound contradictory? It’s not really. Take your son’s room for example. Leaving family photos of Junior scoring the winning run in his Little League game is a bad idea, BUT placing a baseball glove, strategically, on a bedside table is a stroke of genius, if we do say so ourselves. See the difference? A baseball glove conjures up general images of a young boy doing what young boys do – play baseball. A family photo of Junior makes the buyer feel like they’re intruding into your personal space and, if you really intend to sell the house, the latter is bad.

You want Joe Buyer to translate images of his young boy into that room. The totem you use doesn’t have to be a baseball glove. A skateboard, basketball, Harry Potter book, or Nintendo game console could accomplish the same end. Just make sure that whatever you use portrays the inescapable image that the space is a room for a boy – THEIR boy.

I like your definitions of house and home.  You are definitely correct....I don't say "I am going to my house", I say "I am going home" because my house is personalized to my things.  So as we know, buyers walk into a house and look around imagining what their things would look like in it.  Most of the time, they are mostly satisfied with the home they end up buying.  Hook over with us at Bristol Restoration and we'll make that house EXACTLY how your buyer wants it...which means more money for you.  Either way, great post. 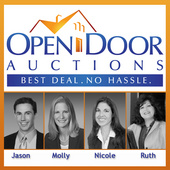 Open Door Auctions is a revolutionary way to buy and sell property. Whether you are looking to buy a new home, or hoping to sell your property quickly, our system will work for you in just 2 weeks. Let us show you!