Houghton Wa has a long history being one of the oldest communities on the east side of Lake Washington, opposite the City of Seattle. First settled by the McGregor and French families in the 1870's.  Later named after Sarah Jane Houghton, a Boston woman, who donated the steeple bell for the settlement's first church

Houghton's start was very rural. Beginning as a loose collection of farms, setting it apart from it's neighbor, Kirkland just to the north, which in contrast, was a plat plan city very early on. As Seattle grew into a large metro complex, the Houghton area still fairly rural became know as a major egg producer for the City across the lake.

With the out break of World War II, Houghton Wa with its' location on Lake Washington, along with its' history of the Anderson Steamboat Company and the Lake Washington Shipyards became a hub of activity.  Almost over night 6,000 new workers from across the country arrived to work in the shipyard as part of the war effort. Temporary housing was set up in several spots. One located just south of present day Lakeview Elementary School along the railroad tracks and one, at the current site of the "Northwest College" campus. In Kirkland just across the northern boarder of Houghton at what is now Everest Park was another large encampment.  A very low key blue collar town with roots in farming and shipbuilding.

TODAY, sixty years later, to quote Wikipedia,"Houghton is one of the wealthier districts of the Eastside suburbs of Seattle." My how times have changed. The shipyards became home to the NFL Seattle Seahawks until 2008, when Carillion Point an upscale developement took place.  In August of 1968 Houghton Wa was consolidated into the City of Kirkland, but there's still a bit of her rural identity showing.

Over Labor Day the Central Houghton Neighborhood Association, host the great "Houghtdown Celebration" fun for all.

This is a GREAT localism post, Mark! Thanks for the mini history lesson on your great town! :))) 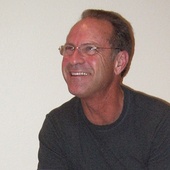