The last time I boarded an airplane, I flew out of Newark, NJ. I could have driven to North Carolina in the time it took me to squeeze into long-term parking and catch my flight. I made last call.

I went through the security checkpoints in a blind fury at the intrusiveness of the airport experience. I'm a bit cranky because my world isn't used to random pat downs and having intimate body regions roughly examined. I'm angry we have to use heavy-handed measures to gain a measure of confidence.

The world has "moved on". That's a phrase I picked up from Stephen King as I read his 7 book Gunslinger series: The Dark Tower. Indeed, the world has moved on! (And oh, by the way--the ending reminded me of another time and space-I'll hold that thought for another time.)

I was seated on the aisle and flying coach--not the most comfortable, but the most affordable way to get to San Antonio. The aircraft, just shy of fully loaded, had two unoccupied seats next to me- the middle and window accommodations.

Thought I'd lucked out and could put my briefcase and laptop next to me. I'd be working comfortably until I hit O'Hare, my transfer to San Antonio stopover.

The boarding door was just about to close when a very late passenger bursts through, is visibly winded, and somewhat disheveled--clearly upset, as well. Uh-oh--she's heading right to my aisle. Yes sirree Bob. (Remember Buffalo Bob anyone?)

She says, "excuse me" and brushes past to plunk down on the window seat. A sigh escapes unmistakably from this frazzled woman. Ms. "OMG so glad I made it" (yeah--I know the feeling too.) looks at my personal property in the middle seat. She cocks her head slightly and says: "Would you mind sharing the seat? I've got my laptop too and have to work."

"No problem Ma'am, I'm in real estate and used to negotiations. What are you willing to give up for some space on the seat?" I chuckle a bit. After just a momentary icy glare, Ms. Frazzled gets it, I'm just kidding and smiles. "I'm not giving up anything for just a bit of room on a seat you didn't buy and have no right to barter!"

Now it's my turn for the "Death Star Stare" Darth Vader taught me. She breaks out laughing because she got me, got me good. The tension is over and Kenny Rogers, well he sounds like Kenny Rogers, comes on the loud speakers welcoming us all to Flight 1621 out of gorgeous Newark en-route to the Windy City--ride at your own risk and don't forget your personal property on the way out--" No, I won't let the door hit me in the rear. The frisk was enough, thanks very much Captain."

OK--so the Captain Kenny signs off and I get back to my "close friend cause this is a bare all relationship for 2 hours and 10 minutes and I'm never gonna see this gal again conversation." At least, that's what I'm thinkin'.

Ms Frazzled, who actually turns out to be, Ms Georgia D. Grim opens up her lap tap- and starts booting up. We haven't begun the taxi to take-off. Oh well--guess that personal and intimate conversation isn't happening on this flight.

But--I was wrong.. Turns out Ms. Grim was quite a talker, if not a superb negotiator. We conversated, is that a word? (It is a prison word some used to denote a conversation was taking place-Ahem-No, I wasn't doing time. I was watching those doing 20 to life.)

Oh yeah, back to Ms. Grim-anyway--We talked a straight two hours and 6 minutes. Take-off took about 2 minutes--landing was a bit quicker. Captain K.R. had lift off fine-needed more practice on landings though.

Yeah, yeah, yeah- So What John? This isn't a classic Beatle tune. This airplane conversation idea has great relevance to the real estate process. Here's why?

A random event took place that put Ms. Georgia D. Grim and John Kavaller together--yeah that's me--the John part. We were captive and once the little dance turned out to be not so intimidating, we got on fine. Georgia shared some personal details as I did.

Just remember several of your own trips when the "intimate airline friend" arrives and departs, in what seems like, moments. As you leave the relationship behind at the airport car rental line, your "friend" never looks back to see if you are crying.

And so it is with many real estate relationships. The agent and client come together from a random query on the Internet or a quick text message about a home for sale seen from a car window.

From that kernel, a union forms. The client has a need, the agent a way to fill that need. Clients share detailed and personal information that, given a different moment in time, never gets shared--Yes, it's that personal. Yet, we agents are privileged to the dots and dashes of our client's lives.

And--our clients often get to see into our lives, not just as agents, but as real live people just like them. Our own telegraph lines fill up our lives and somehow intertwine with our client's karma finalizing with a hug and commission check at closing's end.

As I turn off the office lights at the real estate office, my cell phone rings "Hon, can you pick up Little Georgia at pre-school, Donna can't. Thanks." 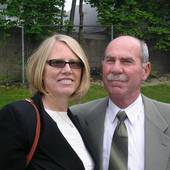