On Tuesday I hosted my first Ballard Neighborhood Block Party!   I have to admit, over the past few years I wondered why so many blocks had their streets closed off on August 2nd, BBQ's wafting smoke filled aromas into the air, neighbors drinking beer together while kids and dogs ran in the streets. It turns out that August 2nd is the national night out.

The National Night Out campaign, a nationwide community promotion sponsored by local police departments, is intended to promote community safety and communication between neighbors. Although there is an option to register your block party with the local police department, I chose to advertise my Ballard Neighborhood Block Party with my own flyers and by word-of-mouth during my daily dog walk.

I have been walking my dog around the block for over three years and have to admit that I have not met, seen, or even talked to the majority of my neighbors. This year I decided to do something different and headed up the effort to start our first neighborhood block party.

My neighborhood in Seattle (Ballard) may have the strongest sense of community in the city. Proof of this can be seen in many Seattle city-wide competitions ranging from us winning the KEXP hood-to-hood fundraising challenge, to blowing away the competition in the neighborhood bike to work challenge, and even having some of the longest running neighborhood bock parties. You can gain a better sense of the Ballard community by checking the local "My Ballard Blog" which lists all of the Ballard Neighborhood Block Parties that were scheduledon Tuesday night.

My block party turned out better than expected as nearly half of the block came out in street to meet each-other. Stories were shared over burgers, kids made s'mores over the campfire, and new friendships were formed. One neighbor, who has been living on the block for 25 years mentioned that this was the first time he had seen everyone on the street get together for something like this. The overall feedback I received was great! I feel that the neighborhood block party contributed to the great sense of community that I already get from living in Ballard. Nothing says community like a neighborhood block party, we're already talking about having another BBQ this summer. Here's to beer and burgers with my neighbors in the BEST Seattle neighborhood!

I love Ballard!  What kind of dog do you have?

Hi Kerrie, thanks for the comment, Ballard is a great place to live. My dog's name is Stout, she's a mixed breed that I found about 13 years ago.

Hi Devin,  Thanks for sharing & Congratulations on your 1st post. Welcome to activerain 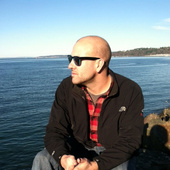