Here  is video footage of my husband and son, who kayak every weekend catching a larger then usual Black Tip shark from his Cobra Kayak.

Yes most mothers maybe upset but my son has spent  lots off time learning  safety drills and  the variety of fish he has caught is really amazing. His  dad  could be  considered somewhat  a shark expert and  has  logged  to many hours  offshore to count.  It is almost always catch and release.  Kayak fishing is growing in popularity and those who know about sharks may know a Black Tip is docile. My husband has was a paramedic for about 18 years. He is a software engineer specializing in information security.  He is an agent but right now not practicing.

I just  thought  I would share.  Its a great  memory  for my son and actually these sharks are all around us. They caught 6 more last weekend and this time dad was behind the camera while the fishing action was all Hunters.

Galveston got some great publicity and we have  had a great summer of visitors. This will be a memory my son will never forget.   After  going on Good Morning America and Fox and Friends (the after show version online was  hilarious) he has had a world wind press tour. He was interviewed again last  night by the Galveston Daily News for a second story. 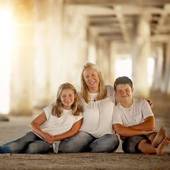