We're receiving reports that the western edge of the Slide Fire has crept down toward Hook Creek near Cedar Glen. Firefighters are on the scene trying to stop the advancing fire.

Firefighters worked tirelessly to successfully save two camps from the flames near Green Valley Lake. Both the Calvary Chapel Camp and the Cedar Crest Camp were saved. Fire crews along with 12 engines and two bulldozers kept the flames at bay.

As of 4 PM, fire officials report that the Grass Fire is 30% contained and the Slide Fire is still at 0%. The Grass Fire has burned about 1,000 acres and was primarily burning within its perimeter today with little expansion. The Slide Fire continues to grow and has burned just over 10,000 acres. A volunteer firefighter who fought the blaze in Green Valley Lake and Running Springs said that for every one house there were unable to save, firefighters managed to save five. The fire has burned down Highway 330 to near the middle passing lane and 1N09.

A number of residents have been reportedly hiking up to reach the mountain communities or trying to use unauthorized roads. Please remember that this is a dangerous fire and can change rapidly. In 2003, a resident died while trying to hike up from Silverwood Lake after falling into a ravine. Please give law enforcement and fire officials the time and space to ensure safety and protect property.

Despite poor visibility, firefighters are making good progress on the Slide and Grass Fires today. Poor visiblity has prevented the fixed wing aircraft from making drops, but 14 helicopters are working both the Slide and Grass Fires along with over a thousand fire personnel. The fire has continued to burn toward Big Bear with news helicopters placing it 2 miles to the west of the Big Bear Dam. However, its progress has slowed as it has moved into the burn area for the Butler Fires, and firefighters are optimistic about the eastward progress halting.

Chief Michael Sherman, from the Crest Forest Fire District, stated that the department is "cautiously optimistic" about the progress of the firefighting in the district communities. Crest Forest Fire District serves Crestline, Cedarpines Park, Valley of Enchantment, Rim Forest and Twin Peaks. He stated that the district "has not suffered any structural losses at this time." 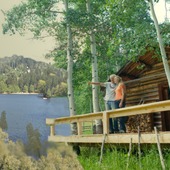