Working with Buyers who used more than one agents

Recently I spoke with a fellow agent Ron who states that he met this one buyer. She is currently wanting specific listings to be emailed to her. However, she informed Ron that he can call her when he sees a good deal out there which was fine. While out showing her some homes, he also brought some homes he hadn't emailed her and showed them to her as well. At first she asked him what was the address. He then gave her the address and started telling him if it was on a corner lot with a white picket fence. He informed her that it was right and how did she know about when there was no pictures in the MLS. The only reason Ron knew was that he had already previewed the home. She said another agent had already shown her the property!

Ron is a good agent and he doesn't work for peanuts. He questioned why she is using another agent to show her homes also when he is already helping her out. She then informed him that there are 3 other agents beside him who are showing her homes. She said whomever show her the home she likes she will place an offer with that agent.

At this point, Ron was getting furious as he felt betrayed. He gave her an ultimatum that if she continues to work this way that they should move on their own ways. She does not want to be stuck with only one agent when working with more agents open the door the opportunities for her. At hearing this, Ron bid her farewell and good luck with her house hunting adventure since he does not operate this way.

Sometimes, we run into these issues with buyers and for that matter it can be time consuming and not worthwhile. You just have to know when to cut the ties and move on to better opportunities where you can be trusted and not being used.

Groups:
Active Rain Newbies
Almost Anything Goes
Everything California
Realtors®
The Art Of Marketing You

Way to go Ron!  I have the conversation up front with all my buyers. I ask them before we ever meet if they are working with an agent.  If they are I tell them to call me if they are ready to work exclusively with me! Until then, "Good Luck!"

Well Ron did the right thing!  I still cannot fathom how a buyer is "stuck" with one agent.  I guess there is still a perception that we all do not have the exact same access to homes!  Good for him!

I recently ran into the same issue with a buyer having the same philosophy. I told him how I worked and would not show him any more homes withouth a buyer agreement. I also pointed out some mistakes he was making with his credit. It convinced him I was the agent to work with and were're closing on a deal next week.

Some people just make up excuses and think agents are a bunch of idiots. This probably happens to every agent. This is why many people refuse to sign buyer broker agreements, and even if they do sign them, they don't honor them. The sooner the agent determines the buyer has no loyalty and is just wasting your time, the better. But on the other hand, if she is looking in areas 1-2 hours drive apartand one agent doesn't do business in that area, a buyer has no choice but to use more than one agent. 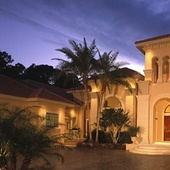