A clip of last night's Two and a Half Men shows Ashton Kutcher nestled on the couch with his laptop.  The laptop is covered in stickers of companies which he is an investor for; Hipmunk, Foursquare, GroupMe and Flipboard.  CBS is saying they'll blurr out the stickers in future re-runs unless the companies pay up but last night's episode was already seen by 20 Million viewers.

What's the most clever way you market your brand? Groups:
Diary of a Realtor
Active Rain Newbies
Addicted to Active Rain
The Art Of Marketing You
The Vent

I have about 20 shopping bags with custom logos from area businesses, so I guess that's a big thing now!  Can't blame Ashton for touting.  I'm sure that was written in the contract!

Methinks this topic makes for a great contest ;-)

Smart marketing and now the network is fuming because their star was smarter then they were.

Now, that was sneaky, but hey, it's all about the money. I missed the episode, but can't wait to watch - sheenless probably won't be shineless.

This is something that I am going to be doing more of. Home buyers and sellers are out there. In this Real Estate Market we have to be creative by "Thinking Outside of the Box" Just tell me that Ashton had his pants on.  :)

I liked the pictures in the comments here, food for thought.

Thanks for the Chatter.

I try to work it in where ever I can without seeming to be too pushy.

Ashton is no slouch, that's for sure! Will have to check out the show again now that he's on there.

Rats... I missed it too. I keep forgetting the new season started.. CBS.com has the full episodes of their top shows online to watch within a few hours of airing (after pacific time I believe) I will have to see if they have already blurred it online.

He's no dummy.  Now if you could get him to invest in Active Rain, we would have been on also!

The real question is ...Is CBS an investor in any of these companies? If they make a big stink it just adds fuel to the firestorm. They're all smart like a fox. Not FOX TV of course, we all know thay are idiots.

I wish I had seen it....TV??  There is time for TV?? lol... Oh my goodness how I wish.  The branding is getting HUGE.  We were just speaking about it at the dinner table.  I was able to squeeze in another show my brother wanted to watch...the new series coming "Terra Nova"...." Lenovo®" all over it.  Other shows...you will notice the cars (all Audi,  all Volvo, or Mini)....or some other computer like MAC ;-p...  Yes, growing by leaps & bounds...  Do I sense another assignment?

p.s.  I think that Debbie's, Nikki's & Phil's ideas are terrific...well the coffee cup would come over the shopping bag.

☔ Kerrie, I think I need to do more thinking on this...  We used to do some things but have dropped them recently...  hmmm thanks for the mental nudge!
Pamela
P. S I need to catch up on my reading here in 'The Chatter'!!!

I didn't notice the stickers.... wasnt' he naked on the couch?

I agree with Ann Allen.... although Ashton may be cute he's in no way as funny as Charlie! It's a shame the writter's have given Ashton such a goofy character. They've ruined a great show that was a nice 30 minute laugh at the end of a difficult day.

I stopped watching when Charlie left.  Loved the show and don't feel any of the remaining characters could carry it. 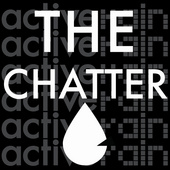