Ceiling Fans Tip of the week.

I check the operation of ceiling fans during a Phoenix home inspection. But one thing I noticed is most people pay no attention to which direction the fan is spinning.

According to the U.S. Department of Energy, ceiling fan users can bump up their thermostat by 4 degrees and see no change in comfort level if the fan is spinning in the right direction.

Fans can be used to blow air down or pull air up. If your registers are adjusted properly they should blow across the ceiling, (not down like most people believe). Here in the Arizona desert the ceiling is often a heat source. If the cold air is blowing across the ceiling it cools it instead of blowing straight down so you only feel it if you are under it.

There is a small switch on the side of the fan that can be pushed from one position to the other. This switch is what changes the direction of the fan.

Often during a Phoenix home inspection I will find ceiling fans that wobble, shake or are noisy. These are all signs that the fan is out of balance. If left this way it can shorten the life of the fan motor, not to mention driving people nuts watching is shake or hearing it make noise nonstop.

The funny thing is most of the ceiling fans I see that are out of balance, simply have loose blades. That is right, 30 seconds and five screws and the ceiling fan problem is solved.(3 screws at the blade and 2 screws where the bracket is attached to the motor)

Most fans come with a balance kit.

You know those parts you didn’t think you needed and threw out with the box? That’s the ballance kit. Don’t worry most hardware stores carry them and they are not very expensive.

Some people say that you can juts tape a penny to the fan to balance it and this is true. Until the tape releases and the penny fly’s across the room.

Put the weight in the front center of one blade, turn the fan on and check for wobble, then repeat with each blade. When you find the blade that reduces the wobble the most, then move the weight either closer to the motor or the other direction and check again. eventually you can get the fan to stop shaking.

Great post.  I always get this confused and I suspect that most of mine are not going in the right direction. 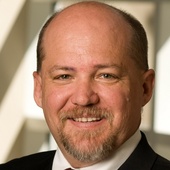