How many foreclosures have you been in that are in less than desirable repair? How many are in that condition due to: no utilities, no theft deterrent, no lawn maintenance? (even though the contractors are collecting a check) And the list goes on and on. I titled this blog "For those who are fluent in 501 c 3s'" because I believe that nowadays you are having to think outside the box to stay ahead of the game. I came up with an idea sometime back to help curb the seemingly inevitable blight that is always in the wake of a foreclosure. It has been labeled collateral damage and accepted as part of the equation; well, it doesn't have to be. In my thinking, it stands to reason that with all of the wasteful spending that goes on with our tax dollars, someone could form a non-profit organization that could request state and federal grant money to "adopt" houses while in limbo. By limbo, I mean that period of time between the vacation of the property and the subsequent closing of escrow.

I feel that grant money awarded to the right organization could go to keep the utilities on, yard mowed etc... which by default would act as a deterrent to vandals and help keep honest people honest. As a result you could conceivably help maintain property values in our neighborhoods. It's the domino effect in the opposite direction. The big bank bailouts served an arguable purpose. But c'mon, think of how much this would do for our industry. The housing industry has suffered a big enough blow without the help of the unwanted blight. Homes will actually spend less time on the market and bring a higher sale price. Who doesn't want that? It would actually give our government something that they could brag about. When you compare the cost of that up keep and total it up at closing, then stack it up against the potential loss of value of the subject property, not to mention the nuclear infection it has on the comps, how could you go wrong?

Some might say "Why should my tax dollars go to maintain property owned by the big banks?" I have no argument for that. It's a valid question and fundamentally, I agree. But, theoretically speaking, for every tax dollar that goes to a good cause, it's a tax dollar that doesn't go to pork. All you would need is an honest team of people, and there are more honest people out there than dishonest. I believe that.  I have personally set up non-profits before and I'm not ashamed to say that it's too much paperwork for me. For me... 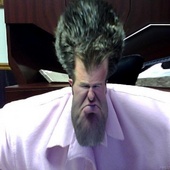