Our whole town has gone squirrelly over Cardinal baseball.  Even if you weren't a fan all year, you are now.  In September our team came from WAY behind and got the wild card spot and then beat the Phillies who everyone thought were a shoe in.  When we had a squirrel walk across the field during one of the turning point games, we turned it into a mascot.

It's just amazing what this turn of surprising events has done for the morale of this town.  We have gone from a city talking about depressing subjects like the economy and politics to a city alive with excitement.  We have a squirrel rally raising serious money for our Children's Hospital with the help of Anheuser Busch.  We have a town walking around feeling proud of their city.  Our mood has turned upbeat.

Being an academic snob myself, it has been amazing to watch my own evolution about the power of sports.  It used to bug me when the sports teams at high schools and colleges got more press than the academics of a school.  Then about 40 years ago, my husband and I visited his friend at Ohio State where the football players were venerated.  As I walked around the campus scoffing at this ridiculousness, our friend who was in a somewhat new field at the time - biomedical engineering - took us to the most amazing lab.  It was filled with computerized objects and robots that were being developed in conjunction with Russian university.  It was phenomenal for the times.  After he saw my total amazement, he looked me straight in the eye and said that without the money and notoriety of the football program this would not be possible.  Okay an ah ha moment.

So you ask:  Aren't we talking about St. Louis Cardinal Baseball?  Well yes because...  If you have never been in St. Louis Missouri during a pennant race you don't know what you are missing.  It turns our wonderful city into a magical city.

How much simpler can it get - it's a city in love with it's baseball team. 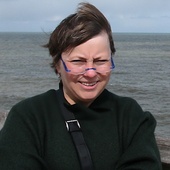