Since I am a numbers person, I always like looking at numbers to examine what is going on in a market. Whether it's looking at historical trends to predict future trend lines, or just examining numbers to be able to gauge the past, numbers never lie. So let's take a look at what the Crested Butte real estate sales number show us.

I say bottomed, because the numbers are starting to show that we are coming out of the sales slump and sales numbers are starting to increase. As of the end of September 2011, we have had $82 million in sales, vs. $61 million for the same period in 2010. New construction has been sneaking into our lives again with a number of new projects in town this summer, including a spec house that is under contract while under construction, with a list price over $1.5 million.

I believe this shift in the trend line is something to watch. After this summer's buyer's frenzy of high end homes in town, the fall has had some sales of high end homes in and outside of town and on the mountain. If high end buyers are getting their feet wet, it bodes well for the middle market buyers as well. The people who have the money usually set the buying trends, and it seems they are ready to put their money to work in our market. Whether it's the lack of good options in other asset classes, the feeling they have been underspending for a few years, or just the attractiveness of our valley, the trend is up.

In Crested Butte we really haven't experienced an influx of foreign investment that has been rising in other areas such as Florida and Las Vegas, picking those markets up off the bottom. Foreign buying makes good sense though, and we would welcome it. We are often compared to European ski towns due to our beautiful valley's scenery and remoteness. It will be interesting to see the aftermath of this August's USA Pro Cycling Challenge and the amazing televised shots of the pro riders in the Crested Butte area and how it effects an increase in visitors, and presumably home sales down the road.

It's nice to be able to report that things are picking up, hopefully we will see this new trend for a number of years.

Diane, you should fix your profile picture.  It isn't showing up for some reason.

Thanks, Ron, Funny, my picture show up fine on my screen. 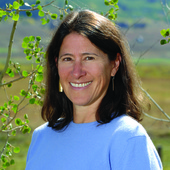