You're Better Off With The Moths

I recently inspected a home where when I walked in the front door I could smell a strong odor. After being there for a few minutes I realized the odor was moth balls. This immediatly raised red flags for me as I thought the owner was trying to mask other odors such as musty mold smells. I found moth balls in almost every closet and after a thorough inspection, I could only find some minor colonies of mold like substances in the crawl space (not unusual for Virginia). The owners were present at the inspection and I asked them about the moth balls and they stated that they just liked the smell. To each his own I guess. Although I was not doing the inspection for the owners, I felt obligated to explain the dangers of moth balls to the owners.

Moth balls were originally developed to prevent moths from invading clothes closets and feasting on the garments within. It was intended that only a few be used in the home. Over time people have realized that moth balls will help ward off other insects and creatures such as mice and snakes and have expanded the use of moth balls. This is not good.

The main ingredient in moth balls is naphthalene, a widely used chemical that the EPA has classified as a persistent bioaccumulative and toxic chemical (PBT). PBT's do not break down easily in the environment and has been known to cause severe allergic reactions in some people. Prolonged use of PBT's can cause damage to red blood cells, nausea, vomiting, diarrhea and blood in the urine as well as chronic runny nose and other allergy symptoms. Naphthalene is a dangerous chemical. Another key ingredient in some brands of moth balls is dichlorobenzene, another dangerous chemical.

There is nothing that moth balls can do that cannot be accomplished in other less dangerous ways. I suggest that you use other methods or You're Better Off With The Moths.

Tags:
youre better off with the moths
richmond virginia home inspector

Great blog and great job. Some really good info. Thanks and good luck this year

I never knew that about moth balls. I always think it is a sign of older people living in the house - seems like moth balls are generational

Agreed; newer homes are more air tight with fewer air changes per hour. Indoors is no place for toxic chemicals.

Have a great week, 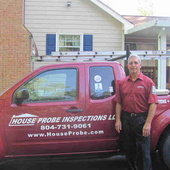