A Countryman who understands and got it right. My sincere compliments to Rep. Allen West (R-Fla.)

Rep. Allen West (R-Fla.), a former Army lieutenant colonel, sends THE WEEKLY STANDARD an email commenting on the Marines' video, and has given us permission to publish it.

“I have sat back and assessed the incident with the video of our Marines urinating on Taliban corpses. I do not recall any self-righteous indignation when our Delta snipers Shugart and Gordon had their bodies dragged through Mogadishu. Neither do I recall media outrage and condemnation of our Blackwater security contractors being killed, their bodies burned, and hung from a bridge in Fallujah.

“All these over-emotional pundits and armchair quarterbacks need to chill. Does anyone remember the two Soldiers from the 101st Airborne Division who were beheaded and gutted in Iraq?

“The Marines were wrong. Give them a maximum punishment under field grade level Article 15 (non-judicial punishment), place a General Officer level letter of reprimand in their personnel file, and have them in full dress uniform stand before their Battalion, each personally apologize to God, Country, and Corps videotaped and conclude by singing the full US Marine Corps Hymn without a teleprompter.

“As for everyone else, unless you have been shot at by the Taliban, shut your mouth, war is hell.”

To the Men and Women who proudly serve and have served our country. I'm very glad we have a few bold Rep's. like Allen West who will stand up with, guts and determination to speak boldly, truthfully and honorably.

LOVE IT! I am so sick of those whiny "activists" who want to run around and cry foul. You come after me and be prepared for war. thats life and I guarantee you any of those "activists" who, self promote, for nothing other than their own self glorifcation get under attack, the first thing they would be hoping arrived, to bail them out and save their a--es, is the US Military!

Hi Terry,,,right on....and thanks for sharing with us.

And thank you, Representative Allen West, for speaking what is on the minds of millions of Americans.

In the debate today Perry said that exactly.  Basicly told the President, and all others in government to back off. Yes it is wrong but cutting off a head is more serious. 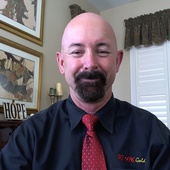