Evidently we’re making national news today. Our first snowfall of the season was just a few days ago on Sunday. The weather projections are telling us there’s a lot more on the way and by the looks of it this morning, they're right. It's really coming down.

Here in the Puget Sound convergence zone we rarely get more than a day or two of snow in the winter so a lot of us don’t own studded tires or chains. What’s the point. Most likely, it’ll snow then warm up and turn to rain. Yet, once in a while the Arctic air mass just has to prove to the Pineapple Express who's boss and we get a snow dump that brings everything to a stop.

It's not that we're weather wussy's in the Pacific Northwest. It's more about hills. No matter where you're going, work, home, or the store, you gotta go up 'em and down 'em... 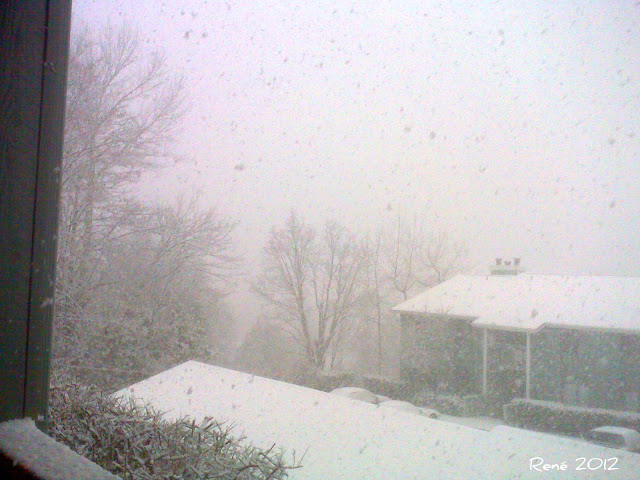 Watching the snow from my deck. Renton, Washington

It usually doesn't last long (thank goodness). Most of us think of it as a floating holiday. Yay, a snow day! Yet joking aside, it can be dangerous. I was downtown Seattle on one of those days. I looked up to see this double long Metro bus tobogganing down First Hill pinging parked cars like an eight year old playing with his Hot Wheels.

I'm praying for that little Honda a couple of blocks down. The one with it's rear tires screaming high C on the ice. I hope he makes it out of the intersection in time. I'll never forget the group at the bus stop, their heads moved in perfect synchronicity as they watched their bus go sliding on by...

Most natives of the Puget Sound area don’t mind driving in the snow. What we're concerned about is 'those' idiots who think they know everything there is to know about driving in this stuff and they're going to prove it. Like the one on my hind end this morning.

They’re so close you can’t see hood nor grill in the rearview mirror, just them gyrating impatiently through flapping wipers on a snowy windshield. He's venting to somebody on his cellphone about the idiot in front of him that’s driving so dang slow. “Hey, that’s me!”

So, today it's about the weather. Be careful out there, my friends.

I visited your fine city this summer Rene and cannot imagine the thrill of those hills covered with snow and ice.

A fresh snowfall is beautiful! However, you definitelty have to be cautious driving in it and not spinning out on black ice.

Rene, the snow looks beautiful!  At least here in DC we don't have the kind of super-steep hills I've seen around Seattle!  And most of us know how to drive on it.

Steve: Especially when it goes through a freeze, warm up and rain, then freeze again!

Deven: Yes, and that's another thing around here, especially on some of the bridges and portions of the freeways that are elevated.

Pat: It is beautiful... and musician to musician... I love the acoustics. I love "sound" when it snows.

Wow, that doesn't look too comfortable.  We have had an unusually dry and warm winter thus far.  It is slated to change tomorrow, and last for the foreseeable 6 days.  Rain, rain, rain!  I'm actually very glad. . .We need it!

Hi René, I heard this on the news last night that you were for a major snow today. And it appears they were right. Glad it doesn't last long but stay safe and warm and don't risk taking chances.

Myrl: Snow wasn't as bad as predicted, although Olympia got 12 to 13 inches. This morning however, we have freezing rain so the roads are really slick this morning. It's supposed to warm this afternoon.

William: I am so fortunate... I can work from home, so that's what I did yesterday. The class I was going to teach yesterday was cancelled.