Did you know that up to 90 percent of the energy used by an incandescent light bulb produces heat instead of light?

Congress has delayed enforcement of the planned phaseout of these watt-guzzlers that were slated to the way of the buggy whip. (You can read about delay in this story from The New York Times.)

But, even with that delay, there’s nothing stopping you from switching to more efficient lighting. It’s one of the easiest, lowest-cost ways to save energy. If you upgrade 15 of the inefficient incandescent light bulbs in your home, you could save about $50 per year on energy costs.*

What are your new choices?

Compare lumens instead of watts
You’re probably used to choosing a light bulb based on watts. But that really only tells you how much energy a bulb uses. Instead, you’ll want to start selecting light bulbs based on lumens — a measurement that tells you the brightness of a bulb. Here’s an example: A 60-watt incandescent bulb provides about 800 lumens, while a 15-watt CFL also provides 800 lumens — it’s the same light level for a lot less energy.

To make shopping easier, light bulb packaging for common screw-base bulbs will start carrying lighting facts labels this year (they might not be on the shelves yet). They look a lot like nutrition labels on food, but instead of listing calories and fat grams, the lighting facts label shows wattage, lumens, annual energy cost, life expectancy and whether the light has a “warm” or “cool” appearance. 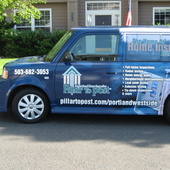 Serving all of the Portland Metro and outlying areas for over 13 years. We serve buyers and sellers ranging from first time homebuyers, to captains of industry.