It’s not like we’re suffering in quiet indignation or anything. But it’s been a while since I’ve witnessed the people of the Pacific Northwest rally in spirit and all come together in agreement about any one thing.

The catalyst was Wednesday afternoon’s blog headline from the Los Angeles Times...

Snow wimps: Seattle is shut down by first real snow of the season

Then add insult to injury...

“Color Seattle clueless. The city has always marched unarmed into its infrequent battles with snow, and Wednesday's snowstorm was no exception.”

Oh, and they didn’t hold back continuing with...

“The snowstorm had been forecast to be the worst to hit the Puget Sound region in 30 years, an ominous warning that scared easily scareable Seattleites. As a result -- as is usually the case here when cold weather hits -- the city collectively declared a snow day and gave up most thoughts of going to work.” 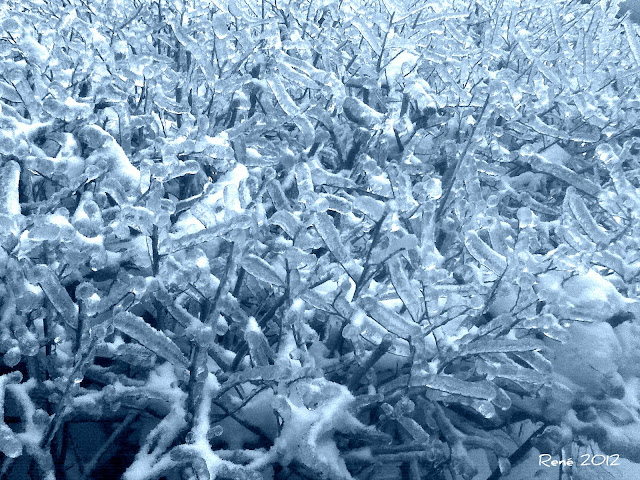 Thursday, January 19th... late afternoon, the hedge out in front of my deck looks kinda like ice worms.

KING 5’s Art Thiel made us proud yesterday when he defended our honor and returned fire with a quintessential Northwest canonical blast over the bow of their blog with:

Critics of Seattle in snow: Shut the hell up

“The incredibly shrinking newspaper has nothing to say to me about Seattle's weather. Especially when a Southland sprinkle sends literally millions of Angelenos into freeway aqua-spasms. TV reporters there hold microphones next to curbs so viewers can hear water running.” 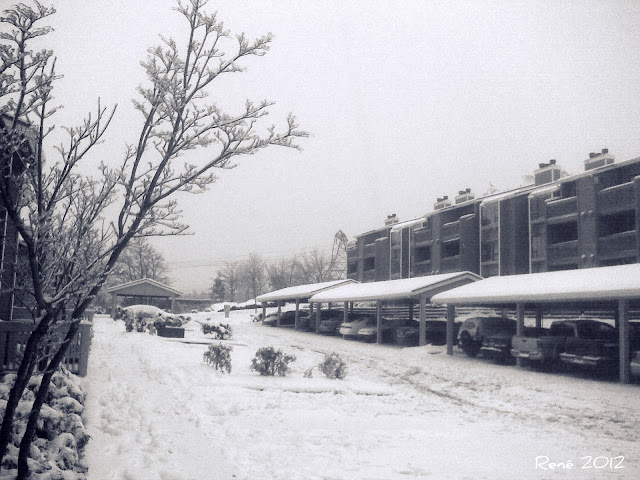 January 19th... Nobody's getting out of here this morning. It's like an ice cream sandwich.

Followed by another fine shot from Scott Sistek, meteorologist for KOMO News.

“Then, as if to prove my point, just hours later the National Weather Services in Los Angeles and San Diego each put out Special Weather Statements for an incoming weather system over the weekend that might bring a quarter to a third of an inch of rain to the coast.“

And you’re calling us wimps? 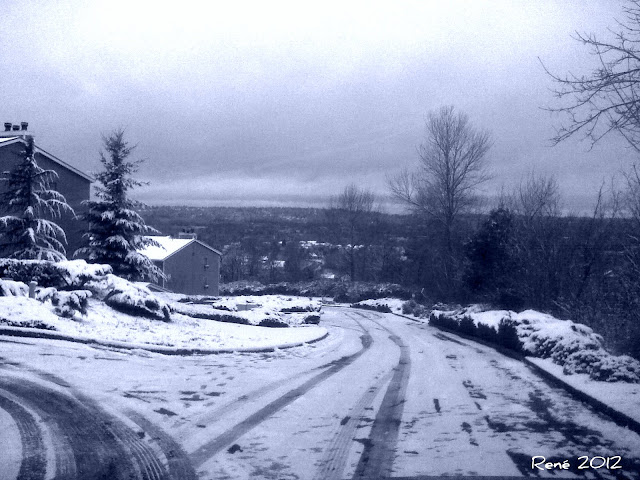 January 16th... pretty on Monday afternoon, but with snow and ice, that's one hill you don't want to go down.

I have to admit laughing over “snow wimps” has been a most welcome relief from this weeks politics, the usual bad news, SOPA & PIPA, being snowed in, and worrying about loved one’s and friends out there on snowy icy streets.

As of 9:00 am yesterday the Washington State Patrol reported over 2,300 accidents. Later that afternoon over 300,000 people were without power and Gov. Chris Gregoire issued a State of Emergency so the National Guard could be mobilized in neccesary.

Rene-That's a breath of fresh air. Two of the nations leading west coast cities getting into over the wimp-factor. That is funny. My money's on Seattle winning this brawl.

Hi Wayne... You gotta love it! This could be a whole new thing... major metro's flinging insults at each other.

Charles: And both a blessing the way I figure it!

Great post Rene.   I think if LA got more than a quarter inch of rain from one storm they would all be declaring an emergency there.   I would much rather be in snowy Seattle than rainy Los Angeles.

Rene' - I had never thought about that.  Cities which aren't use to having snow, probably don't have the munincipal equipment (snowplows, etc.) to deal with it!  However, it makes for nice photos, and provides an excuse to work from home!  "Seattle Snow Wimps" - The title has a ring to it. . .LOL

Rene, It is a real issue when cities that normally don't recieve snow and ice get it.  The fact is that if you don't have the equipment to deal with it, it will shut down entire cities.  I would add that if you don't know how to drive in it slow down, waaaaay down.  I have driven in snow my entire life and my rule of thumb is if I feel safe driving at 35 mph, then I will drive no faster than 25 mph.  In fact, I find I don't drive in it unless I have to!!!

Hope all is back to normal soon for everyone in Seattle.  I saw the "Snow Wimp" thing somewhere on the internet before your Google+ dragged me back here to get your take on it.

We are snow wimps in Columbus in comparison to Cleveland. It's all relative.  We've had a couple of years with heavy snow in Columbus but this year has been OK.  Snow, sleet and freezing rain last night.  Hope they get sand or salt down before I need to venture out today.

It's just funny that LA media would be calling you snow wimps.

Jim: Actually L.A. has had its fair share of rain the past couple of years. For some reason, the whole thing totally cracked me up.

Myrl: Actually we were well prepared this time. Somehow, it rarely fails we get a combo of snow then rain then freeze then more snow which really makes the roads slippery. Then add in all the hills... It does make for awesome photo opportunities and I love the acoustics. Everything sounds different.

Hi Maureen... Safe travels... When I was a lot younger I'd head out in the snow just to be out there. Now, I have to admit I like looking out the window. Not always, but I no longer drop everything I'm doing to run out doors. :O) Love the Google+ mention... thanks!

Tony: Good points... A lot of people around here, especially those that have moved here from other places, think they know how to drive in this snow. It's not like eastern Washington, Idaho, or Montana... It's usually snow on top of ice... I figure for the maybe 1, 2, or 3 days we'll have it each year... I'm working from home!

Rene' all I can say it is "your fault" I have not read the LA Times ing soo many years:)) Find it funny coming from the LA Times, now if it came from The Boston Globe" I would accept it:)))

Endre... For some reason the 'snow wimp' really struck my funny bone. I haven't laughed so hard about something so silly for a long time. I cracked up totally reading the article... then Art and the gang firing back. How fun!

Hi Rene' - you are right about Los Angeles --- after a long spell without rain -- the freeways and streets can turn horrendous ---- hope you enjoyed the snow while it was fresh on the ground.

Michael: I did enjoy and I really enjoyed the bantering back and forth in the press and online about it. Thanks for stopping by.

They call us snow wimps, but like you said, they get any rain, they freak out! I'll still with our 5 inches of rain in 24 hours and laugh at their 1/2 inch.

Todd: That's what I'm talkin' about.