Don't forget that starting tomorrow you will get the opportunity to chat live via Instant Messenger with Rick Steiner, professional wrestler and current real estate agent, from 9am-10am est. about any questions you may have regarding real estate, the current market, and even wrestling!  What you need to do:

It's that easy! Take advantage of this unique opportunity!!!

Show All Comments
Jason Sardi
Auto & Home & Life Insurance throughout North Carolina - Charlotte, NC
Your Agent for Life
With the scheduling early in the morning, not sure I'll be able to do it with work.  I will give it shot though Donna.  Is there anyway to perhaps post some quips of the chat in a future blog here?
Like
Neal Bloom
Brokered by eXp Realty LLC - Weston, FL
Realtor CRS-Weston FL Real Estate
I agree with Jason...will there be a replay or another time slot later in the day?
Like
Jonathan Osman
Jonathan and Associates, Inc - Charlotte, NC
Charlotte House Hunter Group
That's awesome.  Rick Steiner a Realtor?  Hate to get into it with you guys.  I watched WWF growing up and the Steiner Bros were always a favorite.
Like
Rick Steiner
Atlanta Communities - Woodstock, GA
Rick Steiner & Associates

We could definitely try for a later time on another date!  Maybe the week after Thanksgiving when things aren't so busy!  We will also try to post any good tips or interesting conversation we have from tomorrows chat!  Thank you for your interest and I will keep you posted on a later time for next week!

Sorry everyone!!! Rick had to take his son to the doctors office this morning...he was extremely sick! Rick asked if the chat could be moved back to 12pm est.  I apologize if you had planned for the earlier time!

From Ian Richards to Rick Steiner

Dear, Rick Steiner I watched you and  your Brother Scott Steiner Wrestle together

and Thats Former outsider and thats Scott Hall But I Do,'t Know if Thats goingm to happen

Brother Scott Steiner Could Think about Coming Back to TNA Wrestling

So Could you Please Email me at IanCRich@Hotmail.com

Thanks your Fan ian Richards 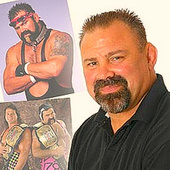 over 14 years ago
bookmark_borderbookmark
KEEPING THE POSITIVE IN THIS NEGATIVE MARKET!
View more Recent Posts   arrow_forwards