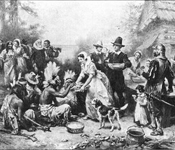 The origin of Thanksgiving began in 1621 when American colonists in Plymouth, Massachusetts and the Wampanoag Indians shared the first Thanksgiving meal. Given some misnomers, we don't think the menu included today's traditional Thanksgiving meal favorites. Thanksgiving historians doubt that there was pumpkin pie (sugar and flour were not available) or mashed potatoes (the Europeans still considered the potato poisonous at this time). Original feast foods that might surprise you were fish, eel, berries, watercress, lobster, dried fruit, clams, venison, and plums. The original feast lasted three days and was based on traditional English harvest festivals that usually occurred in England around September 29th. It wasn't until two years later in 1623, after a horrible drought, that the actual "Thanksgiving" celebration occurred. It was called Thanksgiving because the drought finally came to an end after a period of intense praying by the colonists.

Wishing everyone and their families a safe and happy Thanksgiving!

Plymouth is not far from NASHUA New Hampshire and it is a fun place to visit.  Happy thanksgiving to you and enjoy the pumpkin pie.

It is probably heating up down there in the desert... when it starts getting hot, send your buyers up for some fresh air... cool fresh air in the mountians.  Contact us for generous referral fees for your customers.

about 14 years ago
bookmark_borderbookmark
Wasting Away in Traffic ... Not Just for the Holid...
View more Recent Posts   arrow_forwards

Check back to see the latest news and interesting information on the ever changing real estate market.