Announcing the Who's Who Among Women in E-commerce for 2012

Fort Lauderdale, FL(Tuesday, February 7, 2012). WE Magazine for Women and Women in Ecommerce are excited to announce the list of 100 Women in Ecommerce for 2012. These accomplished women are as different as their professions and ages (from early 20’s to late 60’s). These 100 Women in EcommerceTM represent their industries and professions as artists, astrologers, authors, internet marketers, photographers, coaches, consultants, manufacturers, clothing designers, inventors, event planners, personal trainers and everything in between. Some of the women have been in business for more than 20 years and others as few as two years. And what does each of these women have in common? They all promote their products and services on the Internet. Successfully.

According the Heidi Richards Mooney, Publisher & Editor-in-Chief, “The women WE chose are considered to top in their respective professions and industries. Some are household names and some are known to a small niche of business owners and people they serve. Some were suggested to us by our readers and others we have been following online for years. We are delighted to showcase Walethia Aquil  to our readers and the world as the 2012 Who's Who Among Women in Ecommerce for 2012."

Walethia Aquil is a graduate of The Protocol School of Washington.  Walethia  helps you build a new kind of wealth,“Social Capital” by equipping professionals and other service providers with training in proper business decorum and protocols in a step by step system that is specific to getting results in a competitive marketplace that gets results.

Now you can position yourself to never miss an opportunity due to fear, indecision, doubt, or lack confidence.  Learn how you can move from ‘Invisible to Impeccable’, visit Grace and Charm today.  Have an image or etiquette question email Walethia at: info@graceandcharm.com, direct number 1-810-334-5427 or 1-866-610-3746.

You can read more about these women in our latest issue:

About WE Magazine for Women: WE Magazine is published by The Women in EcommerceTM an organization that has been helping women do MORE business on the WEB since 2001. To contact the publisher, write Heidi Richards Mooney at P.O. Box 550856 ~ Fort Lauderdale, FL 33355-0856, call her at 1-954-625-6606 or visit: www.wemagazineforwomen.com.

Thank you so much!  I'm honored to listed among so many wonderfu, successful women.

With Grace and Charm, 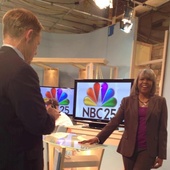