After completion of a nationwide recruitment search, City Manager Erdal Donmez has announced the appointment of Deputy Police Chief Tony Pustizzi as the City's new Chief of Police.

The City began a national search to replace outgoing Police Chief Duncan Foster who retired in 2012, after 27 years of service. During this highly competitive process, over 150 candidates, many with top positions in local, national and federal organizations throughout the country, applied for the position. Through this recruitment process, Chief Pustizzi demonstrated a winning combination of experience and leadership skills that confirmed his choice as the best candidate for the position.

Chief Pustizzi has served 23 years with the Coral Springs Police Department. He began his career in 1988 and served as a patrol officer until 1993, at which time he transferred to the Criminal Investigations Unit as a detective. Chief Pustizzi was promoted to the rank of sergeant in 1995 and to the rank of captain in 2002, where he served as the Criminal Investigations Unit Commander. In 2005, he was promoted to Deputy Chief of Police, overseeing the Operations Division. From 2007-2010, Chief Pustizzi headed up the Administration Division and from 2010-2012, Chief Pustizzi moved back to the Operations Division.

"After an exhaustive national search, I have concluded that Tony Pustizzi is the best person to lead the Coral Springs Police Department into the future. Deputy Chief Pustizzi is a proven leader with 23 years of dedicated public service, Donmez said, I know him as a man of integrity and I'm looking forward to working with him."

I can proudly say that the new chief is admired in his department (by the people I know) and he is a pleasure to work with, from my personal experience.  I am looking forward to his leadership in the city of Coral Springs.

Congrats to your New Police Chief! My husband just got promoted last week from Lieutenant to Deputy Chief Police! 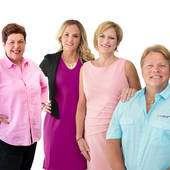