It was New Year's Day 1986 that I decided to give up potato chips.  Don't ask why.  I think I weighed about a buck thirty at the time, so it wasn't about shedding pounds.  I guess it was about discipline.  I figured if I gave up something I really liked, I could learn to do that with other things in my life.  My little brother would torture me by opening a fresh bag in front of me, crunching a few chips loudly, and then telling me how delicious they were, but somehow I made it.  At the stroke of midnight that ushered in 1987, I proceeded to rip open a bag of Lays and binge until my lips were raw and tongue was numb from the salt and vinegar.

21 years later, I decided to add a discipline to my life and I made a resolution to floss everyday before bed.  About day 12, my wife got sick of me looking over at her with the waxy string between my chicklets, smiling, and exclaiming, "Hey, I've flossed 12 days in a row now."  Again, somehow, I made it.  And now it has become so integral to my nighttime rituals that I can't fall asleep until I floss.

As I sat at our kitchen table with pen and notebook yesterday, I thought about what my resolutions for 2008 would be.  Put my shoes away after taking them off?  Lose a couple of pounds?  Keep up with trimming my nose and ear hair?  I asked my wife if she had any resolutions and she responded that she didn't make them because she didn't want to "set herself up for failure".  That gave us some good material to talk about.

Why no resolutions?  Was it a fear of committment?  If we never write things down or dedicate ourselves to something, then we don't have to worry about messing up.  Everyone else quits, right?  I found it interesting that we have become people conditioned to avoid failure at all costs.  True, I look at many of my past resolutions and have bombed more often that not.  BUT, I have given up chips for a year, flossed 365 days in a row, and so many other things because I tried.

What do we need to commit to in 2008?  What's keeping us back?  One key component is having some accountablilty.  Someone to keep us in check.  That is one of my goals for 2008: Surround myself with like-minded, successful people and start a mutually beneficial dialogue so that we can help each other reach our goals this year.  No better place than AR to do that!  Look forward to flossing together this year!

It's never wrong to surround yourself with positive people.

Dan - I'll add that one to my list!  I have 8 resolutions and will probably post them later today.

Karen - Good point.  Fear of failure is crippling.  But as you mentioned, it helps to have positive influences in your life to help you get up and walk (or take baby steps).  Thanks for the comment!

Another great post.  Success breeds success.  There are so many people that won't set goals for fear of failure.  They are missing so much!  I agree, I have broken more resolutions than I have kept, however, when you do stick with one..... oh what a feeling!

I started last year to set 'resolutions' at the end of each month rather than wait for the end of the year.  It worked for a few months and then I lost it.  But.... I'm doing it again this year and have a goal to go more months this time.

You write good posts and I hope you stick to Dan's suggestion!

Like
Mike Tullio
Guaranteed Rate NMLS# 2611 - Sarasota, FL
VP of Mortgage Lending
Martin.  I find it very insightful that you mentioned that success breeds success.  So true.  That's why you see teams like the Patriots win 16 games in a row.  They embrace the belief that they can reach their goals and they execute the actions needed to make them happen.  I'd be interested in hearing what your monthly resolutions are for Jan. 08!  Talk with you soon.
Like
Jim Skal
Victorian Finance, LLC - Pittsburgh, PA

I had to laugh picturing you, knowing the feeling of raw lips and pickled tongue!  Hilarious!  You write good stuff and have inspired me to resolve to floss!  Thanks for reaching out to me after reading my blog!

Like
Mike Tullio
Guaranteed Rate NMLS# 2611 - Sarasota, FL
VP of Mortgage Lending
Happy New Year to you too Jim!  Funny thing is, when I worked in a dentist's office a long time ago, there was a poster on the wall that said, "You don't have to floss your teeth, only the ones you want to keep."  Glad to hear you are renewing your vows to your pearly whites.  Look forward to talking more this year and helping each other's businesses out.  And no chips this week, only salads!
Like
Kate Bourland
Marketing with Kate - Redding, CA
Onlilne Marketing Mobile Marketing

Mike, you are quickly becoming one of my favorite bloggers.  Awesome content, what a great writer you are...nose hair?? that falls in the too much information category LOL

my fav in this blog is goals for 2008: Surround myself with like-minded, successful people and start a mutually beneficial dialogue so that we can help each other reach our goals this year.  No better place than AR to do that!  Look forward to flossing together this year!

Can I be part of that group?

Like
Mike Tullio
Guaranteed Rate NMLS# 2611 - Sarasota, FL
VP of Mortgage Lending
Good morning Kate.  I appreciate the input and sorry about the nosehair.  It's true, there are a lot of naysayers and meatheads out there that like to vomit out their negativity every chance they get.  But we are choosing to define our reality differently and I have found over 6000 people (AR) that still see the opportunity being greater than the threat right now.  I'm here to stay and I'm glad you are too!
Like
chevron_left
Older Post
Back to Top
Newer Post
chevron_right
Rainer
17,653 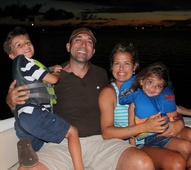