As a prelude to a broader analysis of China’s GDP, and the accuracy of its official GDP figures, I want to start by examining the national real estate statistics for the first four months of 2012. This discussion feeds into the broader GDP picture, but the property story that has been unfolding is important and interesting enough to be worth taking a close look at on its own.

Getting an accurate view of the property sector is complicated by the fact that neither the official price index, nor the Soufun price index, nor the average price/square meter that can be calculated from the investment numbers seem to track very well with each other or with point-of-sale impressions of steep developer discounts over the past eight months. Developers and local governments also enjoy a great deal of discretion in deciding what to count as a “start” or a “completion.” Monthly data releases are never revised, which often gives rise to huge corrections that are simply lumped into the end-year December data release, giving a distorted impression of how trends are unfolding (so, for instance, the 19% drop in property starts in December 2011 probably wasn’t as sudden as it appears, and more likely reflected an unreported decline spread over several preceding months).

All that being said, I’m seeing some rather striking patterns in the data that tell us two main things:

Last month, many observers took comfort from reports that overall real estate investment in Q1 rose 23.5% (in nominal terms) compared to the same period the previous year. To be sure, this was a comedown from 2011, when property investment rose 27.9%, or 2010, when it rose 33.2%. But it still seemed to reflect resilient growth: hardly a collapse in market, more like the kind of modest slowdown consistent with “soft landing.”

Very few people paused to ask where this investment growth was actually coming from. After all, the market was clearly struggling. Year-on-year sales in Q1, for all real estate, was down -14.6%. The decline was even steeper, -17.5%, in residential property, which accounts for about 80% of the market. Office sales were down -10.2%, while growth in “commercial” (i.e., retail) property sales, which saw a boom in 2011, decelerated to +10.5%. Although many people were touting a month-on-month sales recovery in March, compared to the Chinese New Year period, March sales were still down -7.8% from the year before, for the sector as a whole, and -9.7% for residential properties (by comparison, sales in January-February were a disaster, falling -20.9% overall, compared to the first two months of 2011, -24.7% for residential).

Given this consistent fall-off in sales, it’s not surprising that new property starts began to stall. I already mentioned that the 19% drop in new starts in December may have been a bit of a statistical aberration. Starts (measured in floor space) in Jan-Feb were up 5.1%, although the gains came entirely from office and retail — housing starts were flat. But overall starts fell by -4.2% in March, with housing starts down -9.8%, ensuring that overall starts for Q1 were flat (+0.3%) with residential starts down -5.2%. Land sales for Q1 were also flat, with sales proceeds rising 2.5% but land area sold down -3.9%. In March, they were negative (-3.6% sales revenue, -8.5% area sold).

So if sales were down, and starts were either flat or down, where was the 23.5% investment growth coming from? Developers, burdened by 70% leverage ratios and loans threatening to come due, were rushing to complete whatever projects were already in their pipeline, in order to put those units onto the market and raise cash. Completions (measured in floor space) were up 39.3% in Q1, compared to last year (residential completions were similarly up 40.0%). But, of course, those completed units weren’t selling like last year, so unsold inventories expanded. At the close of Q1, the total amount of floor space “for sale” was up 35.5%, compared to the same date last year, while the floor space of residential units “for sale” grew 47.4%.

(That’s just the floor space that developers admitted was for sale. There are plenty of tricks they can use to hold units off the market, in order to massage the official data and avoid spooking buyers. At the end of 2011, total floor space “under construction” was roughly 4.6 times the floor space sold that year. Assuming it typically takes three years to build a unit, from start to finish, that suggests about a year and a half worth of excess inventory hidden somewhere in the pipeline. The ratio for residential property was 4.0, which suggests that, while there may be about a year’s worth of unsold inventory in the housing market, the overhang in commercial real estate is even steeper. Although in absolute terms, it’s the housing overhang that matters).

China’s developers are playing out a kind of prisoner’s dilemma: rush to complete, in hopes of cashing out. But while supply keeps going up, demand is going down. In late March, a central bank (PBOC) survey reported that only 14.1% of Chinese consumers were looking to buy a house in Q2, the lowest level since 1999. Only 17.7% expected home prices to rise in Q2, and 62.9% said they still consider prices to be too high. So all those rushed completions only add to the glut already on the market, driving prices down further and giving buyers — investors and aspiring residents alike — all the more reason to hold off for a better deal. Perhaps this is why Qin Hong, deputy head of research for the Ministry of Housing and Urban-Rural Development (MOHURD), told the Oriental Morning Post in late March that she doesn’t expect housing prices to rebound significantly for the rest of the year. A strong rebound is impossible, she said, due to the continued property tightening policy and high housing inventory (my italics).

The second implication of the dynamic I’ve just described is that the “resilient” growth in real estate investment that seemed to promise a “soft landing” is not very resilient at all. It’s more like the last gasp of a market that’s running out of steam. Once the surge in completions plays out, the declining number of new starts will become the pipeline, and growth in property investment will flatten or go negative. Property investment accounts for roughly a quarter of gross Fixed Asset Investment (FAI), and net FAI accounts for over half of China’s GDP growth. As I noted in January, in a back-of-the-envelope thought exercise, if property investment plateaus (growth falls to zero), it could shave as much as 2.6 percentage points off of real GDP growth. If it fell 10% (in real, not nominal terms) it could bring GDP growth down to 5.3%.

At the time I first saw this dynamic in the data, when the Q1 numbers came out, I figured it would take several months to begin playing out. But the April numbers suggest it is already happening. In April, overall completions rose only 2.8% year-on-year (down from 39.3% in Q1), and housing completions flatlined at 0.8% (down from 40.0% in Q1). As completions petered out, growth in real estate investment decelerated markedly, to just 9.2%, with residential investment growing just 4.0%. Investment actually fell month-on-month, in absolute terms, by -10.7% overall and -9.5% in housing. It only grew year-on-year at all because of a low base set last April. If you plugged this year’s April versus last year’s May, you’d get a year-on-year drop of -9.1% for property investment overall, and -11.0% for housing. (In this context, it’s worth noting that, according to the Beijing Municipal Bureau of Statistics, overall property investment growth in the capital already went negative in January-February, for the first time in three years, dropping -4.6%).

If there’s one bright side to the plateau in completions, it was that unsold inventories advanced less rapidly over the year before. Floor space “for sale” did rise in April, in absolute terms, but not by much. It’s important to remember, though, all the unsold inventory that remains held back and hidden in the pipeline, as noted before.

Meanwhile, the contraction in sales, new starts, and land sales deepened even further in April. Although the decline in sales appeared to moderate slightly for the sector as a whole (-4.5%) and for housing (-2.9%), this was again largely due to a lower base effect from last April, when sales contracted month-on-month by nearly RMB 100 billion. This year’s April sales also registered a significant month-on-month decline, by -17.2% for all property and -15.5% for housing. The more striking news, perhaps, is that commercial property sales, which have been much more resilient until now, also plunged, with office sales falling -23.4% year-on-year and -34.4% compared to March, and retail property sales falling -9.5% year-on-year and -22.7% month-on-month. April was the first month in which all three categories were in year-on-year decline.

Land sales, meanwhile, fell off a cliff. Land sale revenues in April (RMB 27 billion) were down -54.7% compared to April last year (RMB 60 billion), and -47.0% compared to March (RMB 51 billion). Total area sold was down -52.5% compared to last April, and -43.4% compared to March (the year-on-year comparison here relies on a similar reverse calculation as before).

It should be no surprise, then, that foreign investors are pulling back from China’s property sector. Foreign funding for property development was down -91.4% in March and -80.8% in April, compared to the same months last year.

I think most readers will agree, this is pretty powerful stuff. At least one major sector of the Chinese economy (10-13% of GDP), which had been a leading growth driver, is undoubtedly in contraction. More importantly, the dynamics behind these numbers suggest that the market has not bottomed out, but is still in the process of unraveling. That is why I told CNN, in late April:

“No one has hit the panic button yet,” Chovanec said. “Everyone is holding out hope that at some point it turns around somehow. But I also think that’s a triumph of hope over reason.” 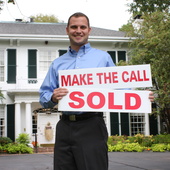