Within the American Legion, each state has a position known as Department Commander.

It's elected position with a term of one year, where the Commander tours every post in the state to meet the members and other dignitaries. They also speak at different functions to raise awareness of, and promote programs that support the health and welfare of both veterans, and those actively serving: homeless vets, the VA budget, their medical facilities, and pending legislation.

It's a lot of work, but quite the honor to be voted into this position, and towards the end of the Commander's term of service, they are lauded at a Homecoming Dinner, given by their home post. Home post members, as well as Legion dignitaries, politicians, friends and family all attend, and it is a big deal. Last year, Doug and I were invited guests of New York State's retiring Commander, Jim Triola. Now-my dad served in the Coast Guard, but my contemporaries were too young for Viet Nam, and too old for subsequent engagements. While I'm certainly grateful to all those who now serve, or have served, I have neither experience of the sacrifices, or any familiarity with the traditions, so wasn't sure what to expect.

The hall was HUGE, and filled. The dias was long, directly opposite the entrance.  Immediately I noticed a small table in front of, and slightly to the left of the dias. It contained a single place setting, a lone  candlestick, a single bud vase, with one perfect red rose in it, all set on a simple white tablecloth.

I thought it was the guest of honor's spot...perhaps this evening would be like a 'celebrity roast' that you see on TV?

The cocktail hour was in full swing, and we met a number of Jim's friends. Then, when the group was called to order, and the evening's program started, no one sat at that table. Within moments, we found out why.

For nearly 30 years now, every official Legion meeting is to have the empty chair and table for one set up, as a physical symbol of the thousands of American POWs/MIAs still unaccounted for from all the wars and conflicts involving the United States. It's a powerful image on its own, but here is the preamble that starts each meeting.

We call your attention to this small table, which occupies a place of dignity and honor near the head table.

It is set for one, symbolizing the fact that members of our armed forces are missing from our ranks. They are referred to as POWs and MIAs. We call them comrades.  They are unable to be with their loved ones and families tonight, so we join together to pay our humble tribute to them, and bear witness to their continued absence.

This table, set for one, is small, symbolizing the frailty of one prisoner, alone against his or her suppressors. The tablecloth is white, symbolic of the purity of their intentions to respond to their country’s call to arms.

The single red rose in the vase signifies the blood they may have shed in sacrifice to ensure the freedom of our beloved United States of America. This rose also reminds us of the family and friends of our missing comrades who keep the faith, while awaiting their return.

The yellow ribbon on the vase represents the yellow ribbons worn on the lapels of the thousands who demand, with unyielding determination, a proper accounting of our comrades who are not among us tonight.

The glass is inverted. They cannot toast with us this night. The chair is empty. They are not here.

The candle is reminiscent of the light of hope which lives in our hearts to illuminate their way home, away from their captors, to the open arms of a grateful nation.

Let us pray to the supreme commander that all our comrades will soon be back within our ranks. Let us remember and never forget their sacrifices. May God forever watch over them and protect them and their families.

If you did not know this story, you are not alone-please pass it on.

And for the holiday weekend, in between all the other stuff, find a parade, take the kids, cheer and clap loudly.

Look for veterans selling the red paper poppies. Buy a bunch, wear yours proudly, and give the rest to friends. Made by disabled vets, they remind us of the past sacrifices of our veterans, with all proceeds going to supporting veterans and their families.

Thank any you meet, and then, in a quiet moment, say a prayer of gratitude.

That is an amazing story Marie, I had no idea.  I do like and appreciate the symbolism.

Thanks for sharing this, Marie.  I had no idea of this tradition. 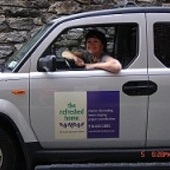