While most attic spaces in Minnesota are insulated with fiberglass or cellulose insulation, there is a relatively new product that provides superior performance:  spray foam.  On old one-and-one-half story houses, foam insulation can be an especially nice way to cut down on heat loss, air leakage, ice dams, yet maintain nearly the same headroom that already exists.

A common way of re-insulating old one-and-one-half story homes in Minnesota is to have closed-cell (2 lb) spray foam applied directly to the roof sheathing, eliminating any ventilation.  This type of spray foamed roof is commonly referred to as a 'hot roof'. 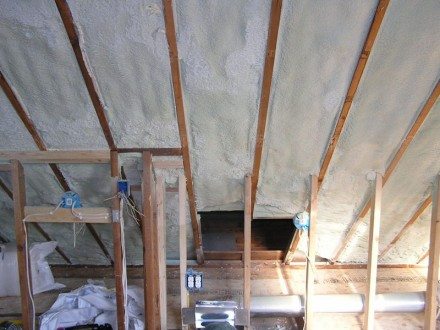 Why are they called 'hot roofs?' A traditional attic has an insulated floor and is ventilated.  Outdoor air is allowed to come in through the soffits and leave at the top of the roof, creating a cold attic space during the winter.    This helps to prevent ice dams, keeps the roof cooler in the summer which may help to prolong the life of the shingles, may help to prevent the accumulation of condensation, and satisfies the warranty requirements of the shingle manufacturer.  When spray foam is applied directly to the roof sheathing, there is no longer an unconditioned attic space; the thermal envelope is moved right up against the underside of the roof.  Because there is no longer ventilation, these are often called hot roofs.

Are they really hot?  No, just slightly warmer.  Studies have shown that color differences in shingles will actually have a larger impact on the temperature of shingles than the difference between a ventilated and a spray-foamed roof.  A 'hot' roof will typically only be a couple of degrees warmer than a ventilated roof.  This has the potential of reducing the shingle life by up to 10%.

What are the benefits? Closed-cell spray foam has a higher insulating value (R-Value) than anything else.  Sprayed Polyurethane foam insulation has an R-Value of 6.8 per inch, while fiberglass batt insulation is about half that, and it's nearly impossible to install properly.  Foam insulation makes for a perfect seal - no gaps, no air leakage, no attic bypasses.  If ductwork is located in the attic space it won't need to be insulated, eliminating a lot of energy loss.  Also, on old one-and-one-half story homes with no soffits or very short soffits, adding proper soffit ventilation can be difficult or impossible.

Are hot roofs allowed in Minnesota?  This is a tricky question.  The current version of the Minnesota State Building Code uses the 2006 International Residential Code, with amendments.  If we turn to section R806.4, we find a section titled "Conditioned attic assemblies."  This section says "Unvented conditioned attic assemblies (spaces between the ceiling joists of the top story and the roof rafters) are permitted under the following conditions:" ... and then goes on to list a bunch of conditions.  So it would seem that hot roofs are allowed, as long as all of the requirements of R806.4 are met.

Not so fast though.  One of the Minnesota amendments to the IRC, section 1309.0806, deletes section R806.4 in it's entirety.  In other words, this says that hot roofs aren't recognized as an acceptable alternative.

The code is not intended to prevent the installation of any material or to prohibit any design or method of construction not specifically prescribed by the code, provided that any alternative has been approved. An alternative material, design, or method of construction shall be approved where the building official finds that the proposed design is satisfactory and complies with the intent of the code, and that the material, method, or work offered is, for the purpose intended, at least the equivalent of that prescribed in the code in quality, strength, effectiveness, fire resistance, durability, and safety. The details of any action granting approval of an alternate shall be recorded and entered in the files of the Department of Building Safety.

In other words, if a building official finds that an alternative method of construction is satisfactory and complies with the intent of the code (etc etc), they "shall" approve it.  In February of 2011, a letter was written on this topic by Sr. Building Code Representative Donald Sivigny to State Building Officials in Minnesota, offering commentary on code acceptance of unvented attic assemblies.  You can read the letter here - http://www.dli.mn.gov/CCLD/PDF/OpinionStaffAttic.pdf .

As mentioned in the letter, the 2012 version of the International Residential Code has expanded the section on unvented attics significantly, and they've also renumbered it as section R806.5.   If you're curious about the differences, I put together a pdf showing the two code versions, which can be viewed here 2006 vs 2012 IRC on hot roofs.  Keep in mind, the 2012 IRC has not been adopted yet in Minnesota, but I expect section R806.5 won't be deleted in the next wave of Minnesota Building Code changes, which are expected to happen in 2013.  It will probably be changed in some fashion, however.

The way it stands now, some cities in Minnesota allow hot roofs as an alternative method of construction and some don't.  I contacted the building inspections department in twenty of the largest cities in the Twin Cities area, to ask whether hot roofs, or 'unventilated roofs' were allowed.  Here's a breakdown of what some of the different cities had to say about hot roofs.  Not all of the cities responded.

No, we don't allow hot roofs.

Maybe.  We might allow hot roofs if certain requirements are met.

For most of the cities that said they would entertain the idea of allowing a hot roof, they also said that they would only allow a hot roof if the shingle manufacturer's warranty wasn't voided by the lack of ventilation.  For example, Owens Corning will not honor their warranty on asphalt shingles if a hot roof is used, but Certainteed does.  By coincidence (?), Owens Corning does not make a closed-cell foam insulation product, but Certainteed does.  Funny, huh?

The bottom line is that if you want to install closed-cell spray foam against your roof decking, you should check with your local building official and shingle manufacturer first.

Closed-cell foam isn't recommended here because of temperature variations and humidity.  I have never seen closed-cell that color - that foam almost looks like Icynene.

Closed-cell is very firm and does not allow sheathing to expand and contract.  It also makes it really hard to remove roof penetrations like plumbing and bath vents and attic fans.  Never seeing a "hot roof," how do they handle that there?

Since you have a cold "assembly," your word, is that a metal HVAC duct or a bath vent in the photo?  Either way, what do they do there about condensation?

You can call me Reubs, as these questions can mean long answers.  Just trying to learn.  I consider regional information to be good information!

"Hot roofs" are nothing new, at least in my region. Cathedral ceilings are typically not vented. I have heard the same with regard to shingle color as opposed to non vented assemblies. As for condensation and IAQ, a mechanical means of air exchange (HRV) is most likely needed.

A lot of research hase been done here in Canada and hot roofs are used in the arctic climate but it still requires venting between the sheathing and the shingeling layers. This is not a large air plenum like the attics we see, but a small 1/2 to 3/4 inch air space above the sheathing (that is foamed and sealed underneath). This means a nailing layer for the shingling is furred out over that or a metal roofing system is used.

Looks like the state needs to get together and settle on a final answer for the entire state to adhere to.

I have not seen one Hot roof here yet. But I bet sooner or later I will.

Don't see that here in Florida. I believe the shingles would simply "fry" due to the intensity of the sun. Even a poorly ventilated attic has an effect on the life of them, I would bet that it could reduce the life to 50% or less.

Probably a cooler attic area though :-)

We're just now seeing this relatively frequently in homes in Kentucky.  Initially, I like it.  But won't know how it stands up, until we get some years of wear on it.

Wow...this is a Hot roof topic if there are differences in the regulation through the state.

Wouldn't it be hard to track down a roof leak with this type of system ?

Reuben, as so often is the case, our regulators and administrators are lagging behind technological advancements

Reuben -- thank you for the update on this form of insulation.  Will have to check into it's local applicability, as I live in a neighborhood of houses like you mention.

Jay - great questions.  It's tough to tell the difference between closed-cell and open-cell foam just by looking at 'em.  You sometimes have to squeeze it to know the difference.

In the photo, that's an HVAC duct, and it's actually a warm assembly.  Everything inside there is within the thermal envelope.  I'll give you a call this morning to chat.

Robert - in that case, it's not really a hot roof.  What you're describing works very well.

Clint -  I expect this to be spelled out and accepted in the code very soon :)

Sarah - definitely.  Lots of insulation contractors push this approach, and homeowners are always happy with the results.  I've never heard from anyone who has regretted doing it.

Susan - kind of.  If a sloped roof leaks, any good inspector or roofer can usually get on the roof and quickly find the installation detail causing the leakage, but if you don't even know you have a leak, it could go on for a while without any visible indications.

On the other hand, I wouldn't consider that reason enough to avoid this product.

Steven - I'm sure it will be coming to your area soon if it hasn't already.

Reuben, I was just at Joseph Lstiburek's seminar with Charlie. It all about controlling that condensation surface layer. I think it is the way to go if you can afford it ; ).

We require whole house ventilation in our state since 1993 (I think ; ).

Donald - I completely agree.  That's the attic on my last house pictured above - it was about $3,700 to have the attic spray foamed, but I felt it was money well spent.

Is it safe? How long will it last? This seems a great insulator.

Airier Natura is a leading manufacturer of Renewable energy products. Established in 1987, Airier Natura is an organization with values deeply rooted in customer satisfaction and ethical business practices.

Our contributions to the renewable energy industry over the last 20 years, in the form of our high quality solar water heaters and our reliable and robust wind turbine ventilators have helped save thousands of rupees across homes and industries throughout India.

Airier Natura is a leading manufacturer of Renewable energy products. Established in 1987, Airier Natura is an organization with values deeply rooted in customer satisfaction and ethical business practices.

Our contributions to the renewable energy industry over the last 20 years, in the form of our high quality solar water heaters and our reliable and robust wind turbine ventilators have helped save thousands of rupees across homes and industries throughout India.

Great post on spyfoam for foundry farnance insulation that has been included the the most important information about the Concrete Foam for future renovation and become the popularity among the commercial field.

Developmental innovation has been accomplished here on concrete concrete wall by using Concrete Foaming Agent. This is thermally efficient way to organized all thing in commercial project.