Let's Go To Auction! - Fast forward 20+ years.  It had been some time since attending my first Auction - Let's Go To Auction! The Early Years.  Got caught up doing the life thing, you know chasing a career, marriage, divorce, births, etc., then life took a turn.  You can't fight change but you can grasp opportunity and new experiences.

Then I met my honey, who knew his thing would be merchandise, Antiques, and AUCTIONS! His territory - up and down the East Coast.  Not quite understanding at this point I tagged along to small local Auctions.  After a while I became more involved and the Auctions got bigger.  On Sunday's we headed to Maine for an Auction that started at around 7 a.m. and ended around 4 p.m.  From general merchandise to the finest antiques this all day Auction, which I've attended for 12 years, operates like a well oiled machine and has for generations.  Amazed at the amount of merchandise bought and sold week after week I was blown away next...

Down to Maryland on Wednesday for another all day Auction starting at around the same time but I can't even tell you when this one ends.  I've never made to the end.  Unless you have ever attended you can't image the enormity of this Auction.  Football field size lots filled with merchandise bought and sold every week.  They drive up and down isles with golf carts calling for bids while selling tables filled with merchandise inside.  Watch!

Did you notice the amount of people?  And this is only a small piece of the Auction. From ten dollars to thousands of dollars - have an Auction and people will come.  No waiting on buyers for months or even years - SOLD in a day!  Guess where I am heading with this?  I get it...

Love the Auctions. Not for Homes but for the junk that we love to collect.

Hi Randy.  I have a great life with Auction - travel, finding great and rare stuff, days filled with hard work.  By the end of the series I think I may change your mind about Auctioning Homes for traditional sales.  Up until now, in my part of the country anyway, this method has mostly been utilized by banks for foreclosure sales however I think it is a great sales method for real estate when done right.  I hope you keep reading and give me your thoughts.  Thanks. BTW love GA. 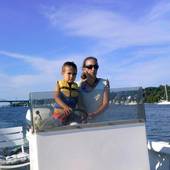