“If you will call your troubles experiences, and remember that every experience develops some latent force within you, you will grow vigorous and happy, however adverse your circumstances may seem to be”- John Heywood

Happy Monday. I hope you are not stressed out with the adversity we are facing named Hurricane Sandy and arriving in the Capital Region later today. If the storm is as bad as they say and you need help call me. I will gladly let you use my generator or submersible pump if I can.

It seems like facing adversity was the theme for me last week. Besides the reports of the impending storm, I had multiple clients dealing with various forms of adversity last week. Job loss, divorce, caring for a loved one with MS, or having a family member diagnosed with a brain tumor are just a few of issues my clients faced last week. Adversity comes in many forms and is unfortunately part of our lives.

The more I thought about adversity the more I realized every time I hear someone that is “successful” speak about their lives it almost always involves a tale of overcoming adversity. I truly believe that adversity is actually a necessary component of success which seems bizarre at first. Dealing with adversity makes you stronger and appreciate success more. It puts things in perspective. The key is how you look at or frame it in your mind.

This week I was drawn into the world of wrestling with two stories that made it to the media outlets. Jeff Blatnick, the local Olympic champion, passed away from complications of heart surgery. Jeff competed and won the gold medal just two years after being diagnosed with Hodgkin’s lymphoma, which is amazing. The day after I read Jeff’s Biography I heard a radio interview with Anthony Nobles, the 2011 college wrestling champion that went 96-0 and has a new book out called “Unstoppable”. The incredible thing about Anthony is he was born with only one leg. Both are great stories of overcoming adversity to find success. So what let these two champions overcome adversity? It’s mindset. Each of these guys easily could have made excuses about the adversity they faced and given up. They could have become victims of the “unfair” hand life dealt them and identified with the story of how they got cheated in life. However that’s not what they did. I am guessing Jeff’s mindset probably fell along the lines of “If I can beat cancer, anything I face in the ring will be easy.” Anthony noble has a quote that he talks about his “unconquerable spirit” in overcoming his perceived handicap. Both of these guys stepped up in the face of adversity rather than adopting a “victim” mentality and penning adversity as an excuse.

We all face adversity. Embrace it and know that it is part of your path to success. You have two choices be a super hero and conquer the adversity or make the adversity an excuse that becomes your story and reason you haven’t found what you are looking for in life. Think of it this way. Two twin brothers are born to an alcoholic father in a broken home. One brother goes on to be wildly successful while the other brother becomes an alcoholic. When asked how he became successful the first brother responded “I had no choice but to be successful, my dad was an alcoholic. Growing up with a dad like that made me who I am. I had no choice but to succeed”. When the second brother was asked what led him to fail in life and become an alcoholic he responded “I had no choice but to fail in life my dad was an alcoholic and I had nothing growing up”. Both faced the same situation but each had completely different mindsets, responses, and outcomes. One was a superhero that stepped up and one was a victim of circumstance.

So no matter what happens with Hurricane Sandy today remember it is an experience that will make you stronger and lead you further along the path of success. Have an awesome week being a super hero like brother number one and owning the adversity in your life. Rock on my friend and stay dry!

It is difficult to understand how we can succeed when problems and disaster is here.  Sometimes it can seem like it will never end but it does and we get stronger. 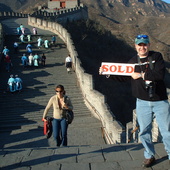