Successful businesses challenge the status quo...now it’s your turn.  We are constantly bombarded with infomercials showing these bizarre contraptions that are actually rather clever.  How many times have you said, “I wish I had thought of that!”  Having the vision necessary to bring these ideas to life takes courage and foresight.  Let me show you who else took on the status quo and how that action changed the world.

Take Steve Jobs with Apple, Jeff Bezos with Amazon, and Mark Zuckerberg with Facebook. None of these people had a framework for their vision because it hadn’t been done before.  They were creating something entirely new.  When they launched, they took the world by surprise and left the competition in the dust.

When Walt Disney walked around that swampy orange grove in California over 60 years ago, people thought he was absolutely nuts.  In fact at the first opening of Disneyland in 1955, the park was flooded with unexpected visitors.  The streets were overcrowded, the lines were long, and the asphalt wasn’t even solid on Main Street.  The headlines touted it as the grandest most elaborate failure they had ever seen.  Well, guess they were wrong!  Back then, they didn’t have the courage to see the vision and look past the end of the day.  But Walt did.  What was at the heart of Walt’s vision? Taking something that is exclusively for children and making it available for everyone to enjoy.

Taking On The Status Quo

There are many sites out there that charge you to list and to search for properties.  People are starting to realize that these systems are operating on an outdated model that should be changed or retired all together. The information is unreliable, incomplete, inaccurate, or just non-existent.  Open source is the new way forward because it is better for the businesses AND the consumers.

So why hasn’t it been done before?  Because no one could quite figure out how to build it in a way that it was financially stable but still benefitting the community.  Until now that is!  RE4Cash.com has combined a number of resources necessary for marketing and listing all under one roof thus giving them the ability to support one another.  It’s the marketing portion that will make the listing portion viable and free.  But we aren’t talking about costly marketing with Zillow prices ranging upwards of $300 a month.  We are talking about prices starting at $2.30 a month on up to $22 a month.  But we will get into that more later.

At NAR one month ago, we were (and still are) giving away a year of free marketing to any person with a zip code and a business serving real estate. Since then, we have had over 1,000 requests for zip codes from people in 45 different states and 8 different countries.  In fact we had several zip codes that were requested by 10-15 different people!  We aren’t just trying to get our little piece of the pie by creating a duplicate but supposedly “better running” listing service.  We are changing the game all together.  But just like Amazon, Facebook, and Disneyland, the wave of change starts with you.  Yes, being on the edge of that change takes time and effort, but not nearly as much as gasping for breath once you have been caught in its wake!

Go Forth and Conquer

Leave me your questions here or send them to me at jesse@re4cash.com.  Before you go, make sure you subscribe to this blog so you don’t miss the next piece of the pie.  Connect with me on Active Rain, Linked In, and Facebook.  Up next is the rundown on our free, open source listing services specifically.  Successful businesses challenge the status quo...now it’s your turn. 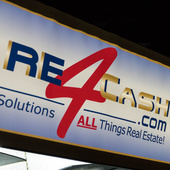