Huntsville, Alabama is part of the greater Tennessee Valley Region and Madison County, Alabama. It is

nestled between the Tennessee River and the Appalachian Mountains, and as such, provides a varied

terrain of mountains and valleys, and holds valuable water resources. Huntsville is home to Redstone

has a population of approximately 417,593 persons; while the area's regional population consists of over

862,000 residents. The area’s climate is seasonal and the area tends to be family-oriented. The U.S.

Census Bureau estimates that as of 2009, the City of Huntsville was the home of 72,910 households, with

an average household size of 2.27 persons. An enduring economic success story is that of the City of

grown together for more than sixty years. Their relationship has developed into a synergistic partnership

that strongly supports the U.S. Army mission and the quality of life of the soldiers and civilians who call

Huntsville. This information includes the local economy, quality of life, and public infrastructure. It is

understood that it is appropriate to consolidate military installations or locate specific businesses,

industries, and scientific research centers in regions where corporate needs are met with ready availability

of a well-qualified workforce, as well as a quality of life and public services in the Huntsville that enable

employees and families to flourish. The City of Huntsville offers such an environment, and more.

The City of Huntsville’s relationship with Redstone Arsenal spans over six decades. Throughout the

years, the relationship has transitioned into a mutually reliant partnership to support the mission of the

U.S. Army and the quality of life of the soldiers stationed here, affiliated DoD civilians, and their

This support is evident and obvious within the community. The community holds a large defense sector,

yet a diverse and broadbased market of other industrial sectors.

The region also holds a valuable and unique resource: A concentration of a highly trained and educated

workforce. Educational and research facilities, and governmental labs fuel innovation and creativity, as

well as provide experience for the educated imminent workforce, who number over 8,800 in fields of

Community leaders appreciate the dynamic research occurring in Huntsville, and have proactively

planned for future growth and development. The community has in the past responded well to an influx of

population based upon its relationship with Redstone Arsenal and NASA. The planning for imminent and

future growth is evident in current housing construction and availability, as well as roadway and

infrastructure improvements that have been constructed or are being constructed presently. The area's

Redstone Arsenal are undertaken, and have been planned for the next two years in excess of $159.5 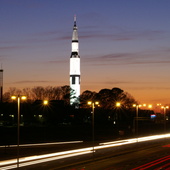