WHAT A WEEKEND I had about 14 day ago! (Foremost, ALWAYS a great time with "lovely" wife as we traveled to Greenbelt, Maryland to celebrate "William" T. Powell's retirement from the Social Security Administrationafter 38 years of distinguished service!  AND TO ADD ICING TO THE CAKE...

While lounging in the foyer afterwards, noticed a "Young Man" in the hallway and I spoke to him, saying "Hello Young Man!"  He looks energized by those words and I noticed he was wearing a hat that said "Tuskegee Airmen"! Now, I'm not one who is short for words, but felt in awe of this distinguished gentleman.  I asked him if he was one of the "Original" Tuskegee Airmen and he said "yes" and his name is Mr. Byron.  He's 92 year young and I joking told him he's on the "Moses" plan (120years) and Mr. Byron chuckled "yes!"

Mr. Byron also mentioned another one of his comrades, Mr. Lemuel was in the building(I think I have his name right!) and as Mr. Lemuel came around the corner a sense of "history" came upon me and again I was as "Anita Wilson" would say "speechless! http://www.youtube.com/watch?v=7LPxJR2TZ7Q

Mr. Lemuel mentioned he was "93" years young and after conversing with these fine gentlemen, as the saying goes,"you could stick a fork in me!"  DONE!

As we finished up our conversation and thanked these Patriots for their service to country and culture, I immediately informed several guests who were congregating in the lobby of the Airmen!

The looks on the guests face was "priceless"!  Many headed towards them with "camera" phones in hand and me and the bride left MD to head back to GOD's Country, Stafford, VA!

Mr. Byron is a true American Hero and I thank him for his dedication and service to his country, his fellow man and to restoring peace in the world!

Thank you Norman!  It was "quite" the experience! 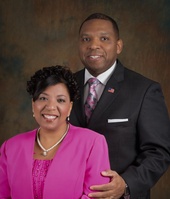